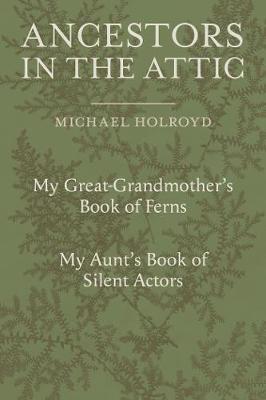 Ancestors in the Attic

Description - Ancestors in the Attic by Michael Holroyd

Michael Holroyd, perhaps the most distinguished of contemporary biographers, has in recent years turned his attention to the stories hidden within his own fascinating (not to say eccentric) family. In Ancestors in the Attic he teases out two especially intriguing episodes, the tales of his great-grandmother and his aunt: which he categorizes respectively as tragedy and comedy. As well as telling their stories in words, he does it visually, through two very different collections made by the women, which he discovered, long after their deaths, in the attic of a house in Maidenhead: the ferns preserved and stitched into beautiful, intricate patterns by his tragic great-grandmother in the 1870s; and the photographs of silent movie actors collected by his lively young aunt in the 1920s. This handsome cloth-bound boxed set contains two volumes - My Great Grandmother's Book of Ferns and My Aunt's Book of Silent Actors - and is a delightful celebration of the appeal of collecting, as well as a fascinating record of a unique family history.

Book Reviews - Ancestors in the Attic by Michael Holroyd

» Have you read this book? We'd like to know what you think about it - write a review about Ancestors in the Attic book by Michael Holroyd and you'll earn 50c in Boomerang Bucks loyalty dollars (you must be a Boomerang Books Account Holder - it's free to sign up and there are great benefits!)