The Archaeology of Urban Life in the Ancient Near East and Egypt, Greece and Rome 2nd New edition

Ancient Cities surveys the cities of the Ancient Near East, Egypt, and the Greek and Roman worlds from the perspectives of archaeology and architectural history, bringing to life the physical world of ancient city dwellers by concentrating on evidence recovered from archaeological excavations. Urban form is the focus: the physical appearance and overall plans of the cities, their architecture and natural topography, and the cultural and historical contexts in which they flourished. Attention is also paid to non-urban features such as religious sanctuaries and burial grounds, places and institutions that were a familiar part of the city dweller's experience. Objects or artifacts that represented the essential furnishings of everyday life are discussed, such as pottery, sculpture, wall paintings, mosaics and coins. Ancient Cities is unusual in presenting this wide range of Old World cultures in such comprehensive detail, giving equal weight to the Preclassical and Classical periods, and in showing the links between these ancient cultures.
User-friendly features include: use of clear and accessible language, assuming no previous background knowledge lavishly illustrated with over 300 line drawings, maps, and photos historical summaries, further reading arranged by topic, plus a consolidated bibliography and comprehensive index new to the second edition: a companion website with an interactive timeline, chapter summaries, study questions, and illustrations; a timeline allowing easy comparison of urban habitation; and a glossary of archaeological and historical terms. In this second edition, Charles Gates has comprehensively revised and updated his original text, and Neslihan Yilmaz has reworked her acclaimed illustrations. Readers and lecturers will be delighted to see a new chapter on Phoenician cities in the first millennium BC, and new sections on Gobekli Tepe, the sensational Neolithic sanctuary; Sinope, a Greek city on the Black Sea coast; and cities of the western Roman Empire.
With its comprehensive presentation of ancient Mediterranean and Near Eastern cities, its rich collection of illustrations, and its new companion website, Ancient Cities will remain an essential textbook for university and high school students across a wide range of archaeology, ancient history, and ancient Near Eastern, Biblical, and classical studies courses. 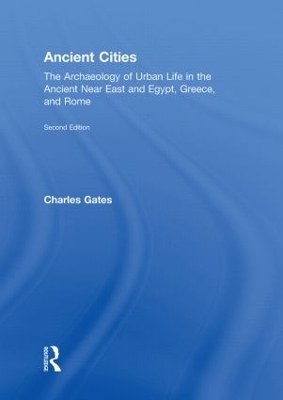 » Have you read this book? We'd like to know what you think about it - write a review about Ancient Cities book by Charles Gates and you'll earn 50c in Boomerang Bucks loyalty dollars (you must be a Boomerang Books Account Holder - it's free to sign up and there are great benefits!)

Charles Gates is senior lecturer of archaeology and art history at Bilkent University in Ankara, Turkey. His research focuses on Minoan, Mycenaean and Greek art and archaeology. Since 1993 he has participated in the excavations at Kinet Hoyuk (Turkey), a Bronze and Iron Age port city in the north-east Mediterrean.

A Preview for this title is currently not available.
More Books By Charles Gates
View All

Stephen Gates of Hingham and Lancaster, Massachusetts, and His Descendants: A Preliminary Work Subject to Addition and Correction
$103.48 $114.98

Latin Word-Building: Root Words with Their More Common Derivatives and Their Meanings Illustrated by Sentences Taken from Caesar and Cicero
$50.58 $56.20