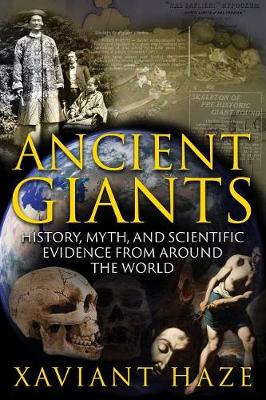 History, Myth, and Scientific Evidence from around the World

Investigates physical evidence, history, and myths to reveal the lost race of giants that once dominated the world

From the Nephilim and Goliath in the Bible to the Titans in Greek mythology and the Fomorians and Frost Giants in Celtic and Nordic lore, almost every culture around the world has spoken of an ancient race of giants. Giant footprints left in the geological bedrock, tens of thousands of years old, have been discovered in India, China, and the war-torn lands of Syria. Giant bones and full skeletons have been found in Europe, the Middle East, Africa, Australia, and Asia. Yet despite mounting evidence, mainstream science continues to consign these findings to the fringe.

Examining global myths, historical records, megalithic ruins, and archaeological findings, Xaviant Haze provides compelling evidence for a lost race of giants in Earth's prehistory. He explores myths that go back thousands of years, including those found in the world's holiest scriptures, as well as medieval and modern myths, such as Geoffrey of Monmouth's account of the first kings of Britain and the stories of giant bones unearthed by Allied soldiers during World War II. He investigates historical reports of ancient giants found in Ireland and the British Isles-the remains of which mysteriously disappeared shortly after their discovery. He explores the legends of giants in Russia and goes deep into the Far East, revealing the multitude of fascinating giant legends in China. Haze explains how giants were responsible for the megalithic wonders of Malta and how the early settlers of Australia discovered the remains of giants but these findings were suppressed by the Royal Academies. He also explores the mythic origins of the giants: Were they the hybrid results from genetic experiments of ancient aliens or from the interbreeding of the fallen angels with the daughters of man?

Covering legends and finds from throughout Europe, the Middle East, Africa, Australia, New Zealand, and the Far East, Haze also presents--in its entirety--The Book of Giants, a portion of the Dead Sea Scrolls suppressed due to its overwhelming support for the existence of giants in antiquity. » Have you read this book? We'd like to know what you think about it - write a review about Ancient Giants book by Xaviant Haze and you'll earn 50c in Boomerang Bucks loyalty dollars (you must be a Boomerang Books Account Holder - it's free to sign up and there are great benefits!)

Xaviant Haze is a researcher of ancient manuscripts and alternative history, exploring and documenting his findings on lost cities and the myths of the pre-diluvian world. The coauthor of The Suppressed History of America, he lives in Tucson, Arizona.

A Preview for this title is currently not available.
More Books By Xaviant Haze
View All