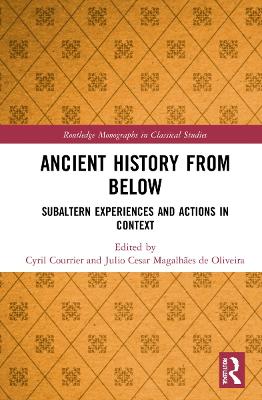 Ancient History from Below: Subaltern Experiences and Actions in Context

Description - Ancient History from Below: Subaltern Experiences and Actions in Context by Cyril Courrier

If ancient history is particularly susceptible to a top-down approach, due to the nature of our evidence and its traditional exploitation by modern scholars, another ancient history-'from below'-is actually possible. This volume examines the possibilities and challenges involved in writing it.

Despite undeniable advances in recent decades, 'our slowness to reconstruct plausible visions of almost any aspect of society beyond the top-most strata of wealth, power or status' (as Nicholas Purcell has put it) remains a persistent feature of the field. Therefore, this book concerns a historical field and social groups that are still today neglected by modern scholarship. However, writing ancient history 'from below' means much more than taking into account the anonymous masses, the subaltern classes and the non-elites. Our task is also, in the felicitous expression coined by Walter Benjamin, 'to brush history against the grain,' to rescue the viewpoint of the subordinated, the traditions of the oppressed. In other words, we should understand the bulk of ancient populations in light of their own experience and their own reactions to that experience. But, how do we do such a history? What sources can we use? What methods and approaches can we employ? What concepts are required to this endeavour? The contributions mainly engage with questions of theory and methodology, but they also constitute inspiring case studies in their own right, ranging from classical Greece to the late antique world.

This book is aimed not only at readers working on classical Greece, republican and imperial Rome and late antiquity but at anyone interested in 'bottom-up' history and social and population history in general. Although the book is primarily intended for scholars, it will also appeal to graduate and undergraduate students of history, archaeology and classical studies.

Book Reviews - Ancient History from Below: Subaltern Experiences and Actions in Context by Cyril Courrier

» Have you read this book? We'd like to know what you think about it - write a review about Ancient History from Below: Subaltern Experiences and Actions in Context book by Cyril Courrier and you'll earn 50c in Boomerang Bucks loyalty dollars (you must be a Boomerang Books Account Holder - it's free to sign up and there are great benefits!)