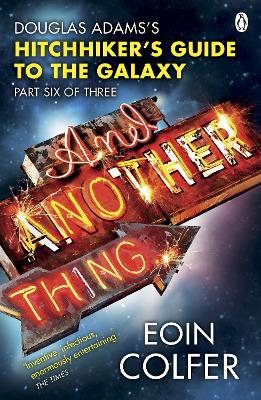 Douglas Adams' Hitchhiker's Guide to the Galaxy. As heard on BBC Radio 4

Description - And Another Thing ... by Eoin Colfer

Arthur Dent's accidental association with that wholly remarkable book The Hitchhiker's Guide to the Galaxy has not been entirely without incident.
Arthur has travelled the length, breadth and depth of known, and unknown, space. He has stumbled forwards and backwards through time. He has been blown up, reassembled, cruelly imprisoned, horribly released and colourfully insulted more than is strictly necessary. And, of course, he has comprehensively failed to grasp the meaning of life, the universe and everything.
Arthur has, though, finally made it home to Earth. But that does not mean he has escaped his fate.
For Arthur's chances of getting his hands on a decent cuppa are evaporating along with the world's oceans. Because no sooner has he arrived than he finds out that Earth is about to be blown up . . . again.

Other Editions - And Another Thing ... by Eoin Colfer Book Reviews - And Another Thing ... by Eoin Colfer

» Have you read this book? We'd like to know what you think about it - write a review about And Another Thing ... book by Eoin Colfer and you'll earn 50c in Boomerang Bucks loyalty dollars (you must be a Boomerang Books Account Holder - it's free to sign up and there are great benefits!)

No, it's not Douglas Adams (although bits of it very likely are), after all, he (sadly) died in 2001. It's Eoin Colfer, doing his best to be true to Douglas Adams' style, bringing our favourite H2G2 characters back to us for another episode, trying to put a little something into the awful vacuum that Adams' death created. Was it worth buying and reading? I certainly think so. I enjoyed it, perhaps not as much as the first ones, but I liked it. For me, it'll be a keeper. Would I buy volume seven of the trilogy if Colfer wrote it? Sure. Although I think I'd like Terry Pratchett to have a go.......... I'll definitely be reading all six again.

Eoin (pronounced 'Owen') Colfer secured the largest ever advance for a children's novel by an unknown author in October 2000. He cast a spell on the publishing world with Artemis Fowl, and hasn't looked back since. Colfer lives in Wexford, Ireland, with his wife, Jackie, and their two sons.

A Preview for this title is currently not available.
More Books By Eoin Colfer
View All