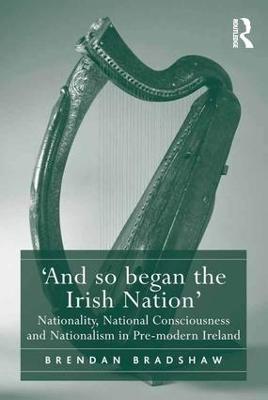 `And so began the Irish Nation'

Description - `And so began the Irish Nation' by Brendan Bradshaw

Nationalism is a particularly slippery subject to define and understand, particularly when applied to early modern Europe. In this collection of essays, Brendan Bradshaw provides an insight into how concepts of 'nationalism' and 'national identity' can be understood and applied to pre-modern Ireland. Drawing upon a selection of his most provocative and pioneering essays, together with three entirely new pieces, the limits and contexts of Irish nationalism are explored and its impact on both early modern society and later generations, examined. The collection reflects especially upon the emergence of national consciousness in Ireland during a calamitous period when the late-medieval, undeveloped sense of a collective identity became suffused with patriotic sentiment and acquired a political edge bound up with notions of national sovereignty and representative self-government. The volume opens with a discussion of the historical methods employed, and an extended introductory essay tracing the history of national consciousness in Ireland from its first beginnings as recorded in the poetry of the early Christian Church to its early-modern flowering, which provides the context for the case studies addressed in the subsequent chapters. These range across a wealth of subjects, including comparisons of Tudor Wales and Ireland, Irish reactions to the 'Westward Enterprise', the Ulster Rising of 1641, the Elizabethans and the Irish, and the two sieges of Limerick. The volume concludes with a transcription and discussion of 'A Treatise for the Reformation of Ireland, 1554-5'. The result of a lifetime's study, this volume offers a rich and rewarding journey through a turbulent yet fascinating period of Irish history, not only illuminating political and religious developments within Ireland, but also how these affected events across the British Isles and beyond.

Book Reviews - `And so began the Irish Nation' by Brendan Bradshaw

» Have you read this book? We'd like to know what you think about it - write a review about `And so began the Irish Nation' book by Brendan Bradshaw and you'll earn 50c in Boomerang Bucks loyalty dollars (you must be a Boomerang Books Account Holder - it's free to sign up and there are great benefits!)

A Preview for this title is currently not available.
More Books By Brendan Bradshaw
View All

Dissolution of the Religious Orders in Ireland under Henry VIII
$58.46 $64.95