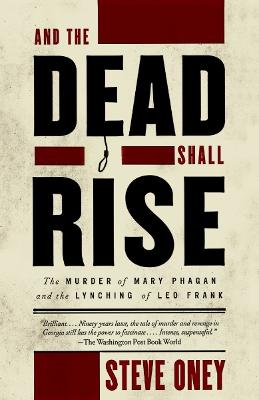 And The Dead Shall Rise

Description - And The Dead Shall Rise by Steve Oney

In 1913, 13-year-old Mary Phagan was found brutally murdered in the basement of the Atlanta pencil factory where she worked. The factory manager, a college-educated Jew named Leo Frank, was arrested, tried, and convicted in a trial that seized national headlines. When the governor commuted his death sentence, Frank was kidnapped and lynched by a group of prominent local citizens.

Steve Oney's acclaimed account re-creates the entire story for the first time, from the police investigations to the gripping trial to the brutal lynching and its aftermath. Oney vividly renders Atlanta, a city enjoying newfound prosperity a half-century after the Civil War, but still rife with barely hidden prejudices and resentments. He introduces a Dickensian pageant of characters, including zealous policemen, intrepid reporters, Frank's martyred wife, and a fiery populist who manipulated local anger at Northern newspapers that pushed for Frank's exoneration. Combining investigative journalism and sweeping social history, this is the definitive account of one of American history's most repellent and most fascinating moments.

Buy And The Dead Shall Rise by Steve Oney from Australia's Online Independent Bookstore, Boomerang Books.

Book Reviews - And The Dead Shall Rise by Steve Oney

» Have you read this book? We'd like to know what you think about it - write a review about And The Dead Shall Rise book by Steve Oney and you'll earn 50c in Boomerang Bucks loyalty dollars (you must be a Boomerang Books Account Holder - it's free to sign up and there are great benefits!)

Steve Oney was educated at the University of Georgia and at Harvard, where he was a Nieman Fellow. He worked for many years as a staff writer for the Atlanta Journal-Constitution Magazine. He has also contributed articles to many national publications, including Esquire, Playboy, Premiere, GQ and the New York Times Magazine. His stories have been anthologized in The Best American Sports Writing, 2006 and The Best American Magazine Writing, 2008. Oney lives in Los Angeles with his wife, Madeline Stuart.