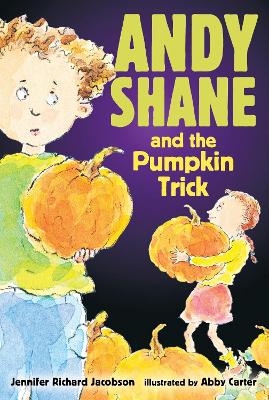 Andy Shane And The Pumpkin Trick

When pranksters ruin Dolores Starbuckle's pumpkins, Andy puts his trickiest plan to the test in this humorous tale filled with Halloween fun.

Andy Shane does not want to go to Dolores Starbuckle's birthday party. It's on the same day as Halloween! Plus, Dolores is always ordering Andy around or squealing over his marble collection. But when Dolores tells Andy that someone is smashing pumpkins in front of her house, the thought of tricking the tricksters is too appealing to resist. Maybe he could scare off the vandals and give Dolores a really great present, all at the same time! Andy Shane returns in a second upbeat tale for early chapter-book readers.

» Have you read this book? We'd like to know what you think about it - write a review about Andy Shane And The Pumpkin Trick book by Jennifer Richard Jacobson and you'll earn 50c in Boomerang Bucks loyalty dollars (you must be a Boomerang Books Account Holder - it's free to sign up and there are great benefits!)

JENNIFER RICHARD JACOBSON is the author of numerous books for younger readers, including ANDY SHANE AND THE VERY BOSSY DOLORES STARBUCKLE, also illustrated by Abby Carter. "I loved Halloween as a child," she says. "Before trick-or-treating, millions of kids (or so it seemed) paraded around our town hall in an annual costume contest. One year, in the final moments, I was chosen to win a prize. I was Mother Goose. Who knew then that I would grow up to tell stories?" ABBY CARTER has illustrated numerous books for young readers, including MY HIPPIE GRANDMOTHER by Reeve Lindbergh and ANDY SHANE AND THE VERY BOSSY DOLORES STARBUCKLE. She says, "I found myself laughing out loud while illustrating Dolores Starbuckle. She is such a lovable pain in the neck!"