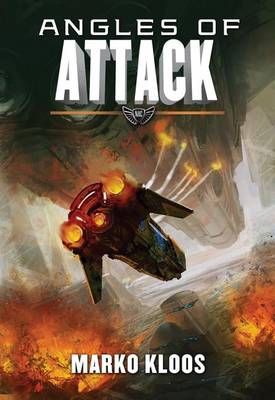 The alien forces known as the Lankies are gathering on the solar system's edge, consolidating their conquest of Mars and setting their sights on Earth. The far-off colony of New Svalbard, cut off from the rest of the galaxy by the Lanky blockade, teeters on the verge of starvation and collapse.

The forces of the two Earth alliances have won minor skirmishes but are in danger of losing the war. For battle-weary staff sergeant Andrew Grayson and the ragged forces of the North American Commonwealth, the fight for survival is entering a catastrophic new phase.

Forging an uneasy alliance with their Sino-Russian enemies, the NAC launches a hybrid task force on a long shot: a stealth mission to breach the Lanky blockade and reestablish supply lines with Earth. Plunging into combat against a merciless alien species that outguns, outmaneuvers, and outfights them at every turn, Andrew and his fellow troopers could end up cornered on their home turf, with no way out and no hope for reinforcement. And this time, the struggle for humanity's future can only end in either victory or annihilation.

» Have you read this book? We'd like to know what you think about it - write a review about Angles of Attack book by Marko Kloos and you'll earn 50c in Boomerang Bucks loyalty dollars (you must be a Boomerang Books Account Holder - it's free to sign up and there are great benefits!)

Marko Kloos was born and raised in Germany, in and around the city of Munster. In the past, he was a soldier, bookseller, freight dockworker, and corporate IT administrator before he decided that he wasn't cut out for anything other than making up stuff for a living. He writes primarily science fiction and fantasy, his favorite genres since his youth, when he spent most of his allowance on German sci-fi pulp serials. He resides in New Hampshire with his wife, two children, and a roving pack of vicious dachshunds.

The Devil and the Dark Water: The mind-blowing new murder mystery from the Sunday Times bestselling author
Stuart Turton
$25.49 $29.99