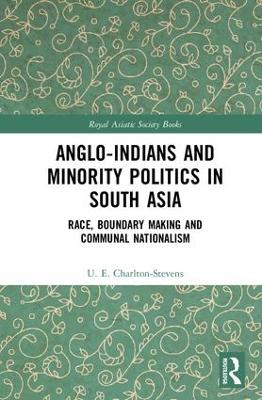 Anglo-Indians are a mixed-race, Christian and Anglophone minority community which arose in South Asia during the long period of European colonialism. An often neglected part of the British Raj, their presence complicates the traditional binary through which British imperialism is viewed - of ruler and ruled, coloniser and colonised.

The book analyses the processes of ethnic group formation and political organisation, beginning with petitions to the East India Company state, through the Raj's constitutional communalism, to constitution-making for the new India. It details how Anglo-Indians sought to preserve protected areas of state and railway employment amidst the growing demands of Indian nationalism. Anglo-Indians both suffered and benefitted from colonial British prejudices, being expected to loyally serve the colonial state as a result of their ties of kinship and culture to the colonial power, whilst being the victims of racial and social discrimination. This mixed experience was embodied in their intermediate position in the Raj's evolving socio-racial employment hierarchy. The question of why and how a numerically small group, who were privileged relative to the great majority of people in South Asia, were granted nominated representatives and reserved employment in the new Indian Constitution, amidst a general curtailment of minority group rights, is tackled directly. Based on a wide range of source materials from Indian and British archives, including the Anglo-Indian Review and the debates of the Constituent Assembly of India, the book illuminatingly foregrounds the issues facing the smaller minorities during the drawn out process of decolonisation in South Asia. It will be of interest to students and researchers of South Asia, Imperial and Global History, Politics, and Mixed Race Studies.

» Have you read this book? We'd like to know what you think about it - write a review about Anglo-Indians and Minority Politics in South Asia book by Uther Charlton-Stevens and you'll earn 50c in Boomerang Bucks loyalty dollars (you must be a Boomerang Books Account Holder - it's free to sign up and there are great benefits!)

Uther Charlton-Stevens is Professor at the Institute of World Economy and Finance at Volgograd State University, Russia. He is also a Fellow of the Royal Asiatic Society of Great Britian and Ireland.