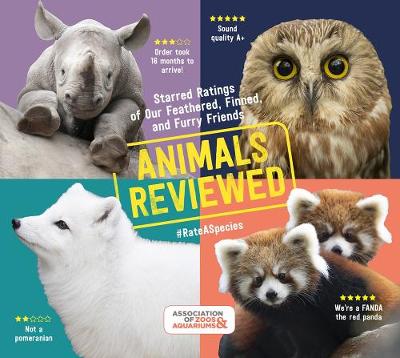 Association of Zoos and Aquariums

Description - Animals Reviewed: Starred Ratings of Our Feathered, Finned and Furry Friends by Association of Zoos and Aquariums

Zookeepers hilariously review the animals in their keep - from the anxious aardvark to the zealous zebra shark and every animal in between. Turtle, four stars: Came with super cute case, not the fastest, but outlasts every comparable unit. Dropped into a pond and still works perfectly. Otter, three stars: Sturdy build, totally winter-ready and waterproof. Only comes in brown. Launched by the Oregon Zoo and quickly picked up by zoos, aquariums, scientists, and the funny people of Twitter, #rateaspecies is a global, viral hit, and a chance for people to honestly - and hilariously - review the animal kingdom. In Animals Reviewed, the Association of Zoos and Aquariums has crowd-sourced 150 of the best entries, the majority of which are new to the book, from their 233-member zoos and aquariums. Packed with adorable photos of every animal and laced with wit and humor, Animals Reviewed is the perfect gift or self-purchase for animal lovers of all ages. AUTHOR: The Association of Zoos and Aquariums (AZA) is a 501(c)3 non-profit organization dedicated to the advancement of zoos and aquariums in the areas of conservation, education, science, and recreation. AZA represents more than 230 institutions in the United States and overseas, which collectively draw more than 195 million visitors every year. These institutions meet the highest standards in animal care and provide a fun, safe, and educational family experience. In addition, they dedicate millions of dollars to support scientific research, conservation, and education programs. 150 colour photographs

Book Reviews - Animals Reviewed: Starred Ratings of Our Feathered, Finned and Furry Friends by Association of Zoos and Aquariums

» Have you read this book? We'd like to know what you think about it - write a review about Animals Reviewed: Starred Ratings of Our Feathered, Finned and Furry Friends book by Association of Zoos and Aquariums and you'll earn 50c in Boomerang Bucks loyalty dollars (you must be a Boomerang Books Account Holder - it's free to sign up and there are great benefits!)