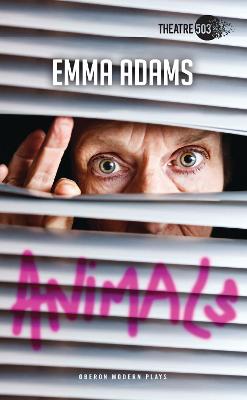 'I want shocks! I've heard they are fun and a lot of blood rushes to your head.'

77-year-old Norma is having a tricky day. She can't finish the crossword and Joy keeps stealing her recliner. Not to mention Helen next door has twisted her ankle falling from a weather balloon, they've run out of Class A drugs and the Utility Inspector just popped round to see if it's time for her involuntary euthanasia... Animals is a wicked satire set in a world where everyone over 60 is tossed on the scrapheap, children are hothoused, and being a 'burden on society' is the ultimate crime.

» Have you read this book? We'd like to know what you think about it - write a review about Animals book by Emma Adams and you'll earn 50c in Boomerang Bucks loyalty dollars (you must be a Boomerang Books Account Holder - it's free to sign up and there are great benefits!)

Emma writes for theatre spaces, unusual places, and screens. Her writing is often fantastical and surreal, ranging from dark political satire for adults through to adventure comedy for children. She has had three plays tour nationally: Home Sweet Home, a magic-realist, multi-sensory, immersive theatre experience for older audiences in 2014, gaining 4 Stars from the Guardian (Freedom Studios), Forgotten Things, shortlisted for the 2009 Meyer-Whitworth Award and Ugly, published by Oberon in 2010 (both Red Ladder). Other work includes: A site-specific adventure for families Northern Big Board performed in Shipley Pool (Chol / Slung Low). A one woman, sci-fi, queer-future, who-dun-it Freakoid (Nominated for an Off West End Theatre Award 2013) performed at Ovalhouse, London and Brimming, part of The Enough Project, a surreal, dark comedy about surviving emotional abuse, which toured the north, summer 2013 (Dep Arts). In 2014 Emma's play Fix This based on research with teenagers and parents living with self-harm, toured schools. It retours Summer 2015 (Space2). Emma was Writer in Residence during West Yorkshire Playhouse's New Writing Season 2012, attended The Royal Court invitation group 2013 and was selected for Accelerate - the Programme for Artistic Development, (Lowry/Jerwood Charitable Foundation) 2013/14. When not writing Emma lectures part-time at Northern Film School.

A Preview for this title is currently not available.
More Books By Emma Adams
View All

Unbreakable Threads: The true story of an Australian mother, a refugee boy and what it really means to be a family
$26.39 $32.99