Philosophical controversy over non-human animals extends further back than many realize -- before Utilitarianism and Darwinism to the very genesis of philosophy. This volume examines the richness and complexity of that long history. Twelve essays trace the significance of animals from Greek and Indian antiquity through the Islamic and Latin medieval traditions, to Renaissance and early modern thought, ending with contemporary notions about
animals. Two main questions emerge throughout the volume: what capacities can be ascribed to animals, and how should we treat them? Notoriously ungenerous attitudes towards animals' mental lives and
ethics status, found for instance in Aristotle and Descartes, are shown to have been more nuanced than often supposed, while remarkable defenses of benevolence towards animals are unearthed in late antiquity, India, the Islamic world, and Kant. Other chapters examine cannibalism and vegetarianism in Renaissance thought, and the scientific testing of animals. A series of interdisciplinary reflections sheds further light on human attitudes towards animals, looking at their depiction in visual
artworks from China, Africa, and Europe, as well as the rich tradition of animal fables beginning with Aesop.

Other Editions - Animals by Peter Adamson 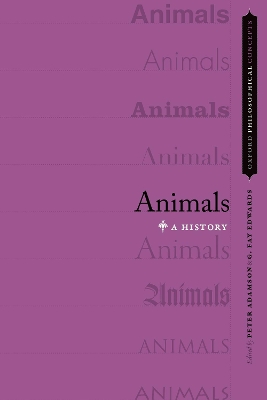 » Have you read this book? We'd like to know what you think about it - write a review about Animals book by Peter Adamson and you'll earn 50c in Boomerang Bucks loyalty dollars (you must be a Boomerang Books Account Holder - it's free to sign up and there are great benefits!)

Peter Adamson is Professor of Late Ancient and Arabic Philosophy at the LMU in Munich. He is the editor of another forthcoming volume in the Oxford Philosophical Concepts series, Health: the History of a Concept, and the author of the book series A History of Philosophy Without Any Gaps, published by Oxford University Press. G. Fay Edwards completed her doctorate in Ancient Philosophy at King's College London in 2013, and took up a position as an Assistant Professor of Philosophy at Washington University in St. Louis until late 2015. She has published papers on Plato, Porphyry and the Stoics, and is the author of 'How to Escape Indictment for Impiety: Teaching as Punishment in the Euthyphro,' which was published in the Journal of the History of Philosophy.