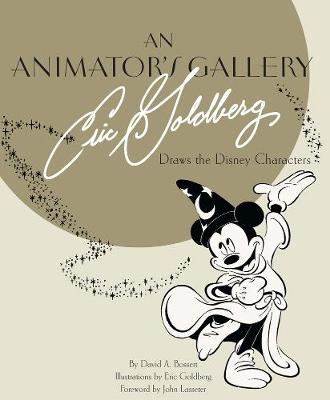 This whimsical, deluxe Art Deco-themed art book showcases Walt Disney characters in a style reminiscent of caricatures from the famed walls of Sardi's and The Brown Derby. Disney Supervising Animator and Director Eric Goldberg drew a little more than 200 stylized images in a collection that first debuted as a display within the Roy E. Disney Animation Building in Burbank, California. Now with An Animator's Gallery, the show comes right to you. Fans of all ages, and from all over, can enjoy Eric's playful portraits, starting with Oswald the Lucky Rabbit and Mickey Mouse through characters from Frozen and Big Hero 6. Bonus sections will even feature some of the most beloved characters from Pixar.

» Have you read this book? We'd like to know what you think about it - write a review about Animator's Gallery, An: Eric Goldberg Draws The Disney Characters book by David A. Bossert and you'll earn 50c in Boomerang Bucks loyalty dollars (you must be a Boomerang Books Account Holder - it's free to sign up and there are great benefits!)

David A. Bossert is an award-winning artist, filmmaker, and author. He is a thirty-two-year veteran of The Walt Disney Company and is an independent producer and creative director. Dave is considered an authority and expert on Disney animation and history. He co-authored Disney Animated, which was named iPad App of 2013 by Apple and won a prestigious British Academy of Film and Television Arts (BAFTA) Award. He is also the author of Remembering Roy E. Disney: Memories and Photos of a Storied Life; An Animator's Gallery: Eric Goldberg Draws the Disney Characters; and Dali and Disney: Destino-The Story, Artwork, and Friendship Behind the Legendary Film; and Oswald the Lucky Rabbit: The Search for the Lost Disney Cartoons. You can connect with Dave on social media and/or at www.davidbossert.com. ERIC GOLDBERG, supervising animator and director at the Walt Disney AnimationStudios, has brought to life Aladdin's Genie, Hercules's Phil, ThePrincess and the Frog's Louis, and many more. Mr. Goldberg codirected theAcademy Award winning Pocahontas and directed two segments, "Rhapsody inBlue" and "The Carnival of the Animals, Finale," in Fantasia/2000. Most recentlyhe led the hand-drawn animation team on the satirical short Get a Horse!, starring Mickey and friends, which debuted in theaters with Frozen.Before joining The Walt Disney Company in 1990, he founded and ran his ownaward-winning animation house, Pizazz Pictures, in London.

A Preview for this title is currently not available.
More Books By David A. Bossert
View All