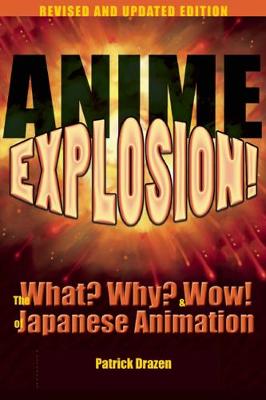 The What? Why? and Wow! of Japanese Animation, Revised and Updated Edition Second Edition

For fans, culture watchers, and perplexed outsiders, this expanded edition offers an engaging tour of the anime megaverse, from older artistic traditions to the works of modern creators like Hayao Miyazaki, Katsuhiro Otomo, Satoshi Kon, and CLAMP. Examined are all of anime's major themes, styles, and conventions, plus the familiar tropes of giant robots, samurai, furry beasts, high school heroines, and gay/girl/fanboy love. Concluding are fifteen essays on favorite anime, including Evangelion, Escaflowne, Sailor Moon, Patlabor, and Fullmetal Alchemist.

Patrick Drazen is an anime historian who lives in Bloomington Normal, Illinois.

» Have you read this book? We'd like to know what you think about it - write a review about Anime Explosion! book by Patrick Drazen and you'll earn 50c in Boomerang Bucks loyalty dollars (you must be a Boomerang Books Account Holder - it's free to sign up and there are great benefits!)

Patrick Drazen has presented at the 2004 Schoolgirls and Mobilesuits, at Yaoi-Con in 2002, at the 2006 Cherry Blossom Festival Anime Marathon at the Freer Gallery of the Smithsonian Institution, and for several years at Anime Central in Chicago. He's been at anime conventions in Columbus, Indianapolis, and Peoria, and gave a talk on anime based on western literature at his alma mater Illinois Wesleyan University for Homecoming 2012. He also gave talks about anime at Mayor Daley's Book Club, an annual literacy festival for local authors. He's written articles on anime for Animation magazine and the British magazine SFX, on manga for Time Out New York, sits on the Editorial Board for Mechademia journal, and participated in a panel discussion in 2006 with Gundam creator Yoshiyuki Tomino as part of the Chicago International Film Festival. Drazen has an extensive anime collection, from Betamax to DVD, and his presentations have touched on Japanese folklore in modern anime, same-sex relationships, and the fluid nature of heroes and villains in anime.

A Preview for this title is currently not available.
More Books By Patrick Drazen
View All