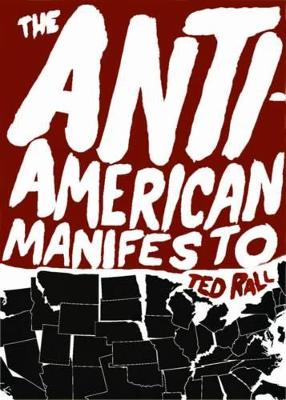 In arguably the most radical book published in decades, cartoonist/columnist Ted Rall has produced the book he was always meant to write- a new manifesto for an America heading toward economic and political collapse. While others mourn the damage to the postmodern American capitalist system created by the recent global economic collapse, Rall sees an opportunity. As millions of people lose their jobs and their homes, they and millions more are opening their minds to the possibility of creating a radically different form of government and economic infrastructure.
But there are dangers. As in Russia in 1991, criminals and right-wing extremists are best prepared to fill the power vacuum from a collapsing United States. The best way to stop them, Rall argues, is not collapse-but revolution. Not by other people, but by us. Not in the future, but now. While it's still possible.

» Have you read this book? We'd like to know what you think about it - write a review about Anti-american Manifesto book by Ted Rall and you'll earn 50c in Boomerang Bucks loyalty dollars (you must be a Boomerang Books Account Holder - it's free to sign up and there are great benefits!)

Twice the winner of the Robert F. Kennedy Journalism Award and a Pulitzer Prize finalist, TED RALL is a political cartoonist, opinion columnist, graphic novelist and occasional war correspondent whose work has appeared in hundreds of publications, including the New York Times, Washington Post, Village Voice, and Los Angeles Times.

A Preview for this title is currently not available.
More Books By Ted Rall
View All

Political Suicide: The Democratic National Committee and the Fight for the Soul of the Democratic Party, A Graphic History
$45.59 $50.65