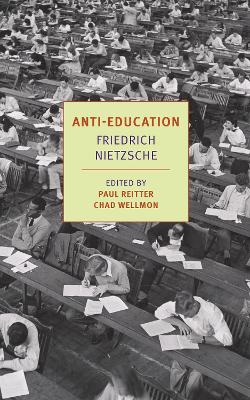 In 1869, at the age of twenty-four, the precociously brilliant Friedrich Nietzsche was appointed to a professorship of classical philology at the University of Basel. He seemed marked for a successful and conventional academic career. Then the philosophy of Schopenhauer and the music of Wagner transformed his ambitions. The genius of such thinkers and makers-the kind of genius that had emerged in ancient Greece-this alone was the touchstone for true understanding. But how was education to serve genius, especially in a modern society marked more and more by an unholy alliance between academic specialization, mass-market journalism, and the militarized state? Something more than sturdy scholarship was called for. A new way of teaching and questioning, a new philosophy . . .

What that new way might be was the question Nietzsche broached in five vivid, popular public lectures in Basel in 1872.Anti-Educationpresents a provocative and timely reckoning with what remains one of the central challenges of the modern world.

» Have you read this book? We'd like to know what you think about it - write a review about Anti-Education book by Friederich Nietzsche and you'll earn 50c in Boomerang Bucks loyalty dollars (you must be a Boomerang Books Account Holder - it's free to sign up and there are great benefits!)

Friedrich Nietzsche (1844-1900) was a German philosopher, essayist, and critic whose writings about morality, truth, language, aesthetics, and nihilism are considered cornerstones of Western philosophy. Damion Searls has translated many classic twentieth-century writers, including Proust, Rilke, Elfriede Jelinek, Christa Wolf, Hans Keilson, and Herman Hesse. For NYRB Classics, he edited Henry David Thoreau's The Journal- 1837-1861, translated Nescio's Amsterdam Stories, and Robert Walser's A Schoolboy's Diary. He has received Guggenheim, National Endowment for the Arts, and Cullman Center fellowships and is currently writing a book about Hermann Rorschach and the cultural history of the Rorschach test. Paul Reitter is professor of Germanic languages and literatures and director of the Humanities Institute at Ohio State. His work has appeared in both scholarly journals and venues such as Harper's Magazine, Bookforum, The Paris Review, The Nation, and The Times Literary Supplement. He is the author of three books, and he recently collaborated with Jonathan Franzen and Daniel Kehlmann on The Kraus Proj

A Preview for this title is currently not available.
More Books By Friederich Nietzsche
View All