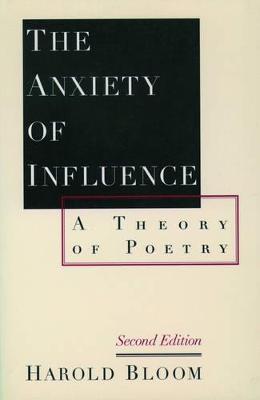 The Anxiety of Influence

Description - The Anxiety of Influence by Harold Bloom

Harold Bloom's The Anxiety of Influence has cast its own long shadow of influence since it was first published in 1973. Through an insightful study of Romantic poets, Bloom puts forth his central vision of the relations between tradition and the individual artist. Although Bloom was never the leader of any critical "camp," his argument that all literary texts are a response to those that precede them had an enormous impact on the practice of deconstruction and
poststructuralist literary theory in this country. The book remains a central work of criticism for all students of literature and has sold over 17,000 copies in paperback since 1984. Written in a moving
personal style, anchored by concrete examples, and memorably quotable, Bloom's book maintains that the anxiety of influence cannot be evaded--neither by poets nor by responsible readers and critics. This second edition contains a new Introduction, which explains the genesis of Bloom's thinking and the subsequent influence of the book on literary criticism of the past twenty years.criticism of the past twenty years. Here, Bloom asserts that the anxiety of influence comes out of
a complex act of strong misreading, a creative interpretation he calls "poetic misprision." The influence-anxiety does not so much concern the forerunner but rather is an anxiety achieved in and by the
story, novel, play, poem, or essay. In other words, without Keats's reading of Shakespeare, Milton, and Wordsworth, we could not have Keats's odes and sonnets and his two Hyperions. Given the enormous attention generated by Bloom's controversial The Western Canon, this new edition is certain to find a readymade audience among the new generation of scholars, students, and layreaders interested in the Bloom cannon.

Book Reviews - The Anxiety of Influence by Harold Bloom

» Have you read this book? We'd like to know what you think about it - write a review about Anxiety of Influence book by Harold Bloom and you'll earn 50c in Boomerang Bucks loyalty dollars (you must be a Boomerang Books Account Holder - it's free to sign up and there are great benefits!)

Harold Bloom is Sterling Professor of the Humanities at Yale University and Berg Professor of English at New York University. He is the author of numerous publications including A Map of Misreading, Yeats, The Book of J, The American Religion, The Western Canon, and Omens of the Millennium.

A Preview for this title is currently not available.
More Books By Harold Bloom
View All

Stories and Poems for Extremely Intelligent Children of All Ages
$43.58 $48.42