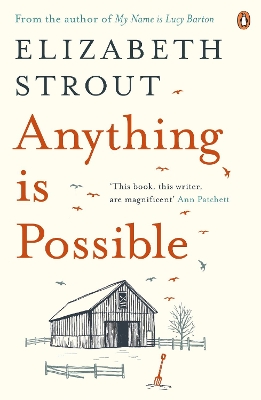 Description - Anything is Possible by Elizabeth Strout

A stunning novel by the No. 1 New York Times bestselling, Times Top 10 bestseller and Man Booker long-listed author of Olive Kitteridge and My Name is Lucy Barton

Anything is Possible tells the story of the inhabitants of rural, dusty Amgash, Illinois, the hometown of Lucy Barton, a successful New York writer who finally returns, after seventeen years of absence, to visit the siblings she left behind.

Reverberating with the deep bonds of family, and the hope that comes with reconciliation, Anything Is Possible again underscores Elizabeth Strout's place as one of America's most respected and cherished authors.

Other Editions - Anything is Possible by Elizabeth Strout 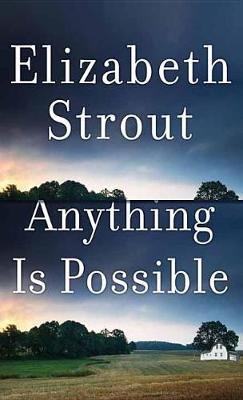 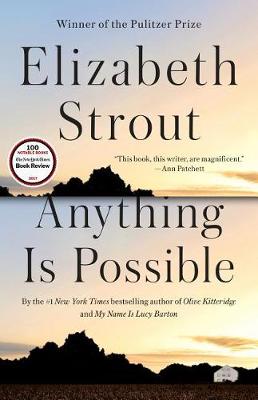 View all editions of Anything is Possible by Elizabeth Strout

Book Reviews - Anything is Possible by Elizabeth Strout

» Have you read this book? We'd like to know what you think about it - write a review about Anything is Possible book by Elizabeth Strout and you'll earn 50c in Boomerang Bucks loyalty dollars (you must be a Boomerang Books Account Holder - it's free to sign up and there are great benefits!)

Book Review: Anything is Possible by Elizabeth Strout - Reviewed by CloggieA (19 Aug 2021)

5 stars Anything Is Possible is the second novel in the Amgash series by best-selling American author, Elizabeth Strout. There was, in Lucy Barton’s memoir, mention of a number of people whose lives intersected with her own when she lived in Amgash. Their recollections of the Barton family, and their encounters with the members of that family, and each other, provide different perspectives of the life she described, expanding on what she shared and providing a background to those lives.

As Tommy Guptill, former janitor at the high school, drives past the Barton farm into town, he recalls his concern for young Lucy; the book store has made a display of her memoir; on his return he calls in to check on Pete Barton’s welfare and hears a disturbing confession.

High School Counsellor, Patty Nicely loses her cool during an unpleasant encounter with Lucy’s niece, Lila Lane; conversations with her sister and her increasingly-demented mother recall incidents with the Barton family; reading Lucy’s memoir is a positive experience that inspires a good deed.

Patty’s older sister, Linda Peterson-Cornell and her wealthy husband host a photographer exhibiting at the Summer Festival. Yvonne Tuttle feels uncomfortable, apparently with good reason. What happens next has her assessing why she is so loyal to her perverted husband.

Vietnam vet and PTSD sufferer, Charlie Macauley gives the woman he loves a gift not his to give, then waits for the inevitable fallout in Dottie Blaine’s B&B.

Having decamped to Italy with her lover four years earlier at the age of seventy-four, Mary Mumford finally gets a visit from her dearest daughter, Angelina. Misunderstandings are cleared up, marriages discussed and Amgash gossip shared.

Pete Barton prepares for a visit from the sister who has not returned to their Amgash house in seventeen years. They are surprised by their sister Vicky’s arrival, and Lucy’s reaction to unearthed childhood memories baffles them both.

In her B&B, Dottie Blaine, second cousin to the Barton siblings, sees a passing parade of guests, some of whom share confidences she would rather not be burdened with; others, like Charlie Macauley, for whom she will always feel empathy.

When actress Annie Appleby returns to the family’s potato farm, her father’s long-held secret is revealed.

Abel Blaine, the second cousin who took Lucy Barton dumpster diving when they were dirt-poor and hungry, muses on his acquired wealth with a poorly-reviewed theatre actor.

These vignettes of peoples’ lives occur over a year or more, and illustrate that premise of six or less degrees of separation. Revisiting those characters from Lucy’s memoir, and learning more of their lives, is quite a pleasurable experience.

Strout gives many of them wise words and insightful observations: “This was the skin that protected you from the world – this loving of another person you shared your life with” and “They had grown up on shame; it was the nutrient of their soil” are examples.

Strout’s writing, both in style and subject matter, is reminiscent of Sebastian Barry with shades of Anne Tyler. Strout writes about ordinary people leading what they believe are ordinary lives (although there are definitely some quirky ones doing strange things amongst them) and does it with exquisite yet succinct prose. Another powerful read.

Elizabeth Strout is the Pulitzer prize-winning author of Olive Kitteridge, as well as The Burgess Boys, a New York Times bestseller, Abide With Me and Amy and Isabelle, which won the Los Angeles Times Art Seidenbaum Award for First Fiction and the Chicago Tribune Heartland Prize. She has also been a finalist for the PEN/Faulkner Award and the Orange Prize. She lives in New York City and Portland, Maine.

A Preview for this title is currently not available.
More Books By Elizabeth Strout
View All

Olive, Again: New novel by the author of the Pulitzer Prize-winning Olive Kitteridge
$18.39 $22.99