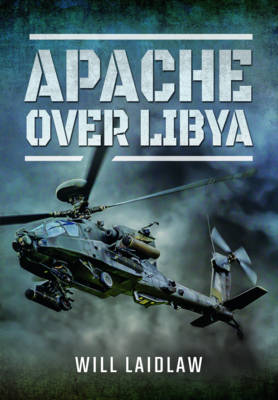 Description - Apache Over Libya by Will Laidlaw

In May 2011, after a Mediterranean exercise to prove the Apache's ability to work shipborne, HMS Ocean and her embarked Apache attack helicopters from 656 Squadron, Army Air Corps were about to head home. But the civil war in Libya and the resulting NATO air campaign intervened. A few days later the Author and his fellow Apache pilots were in action at night over hostile territory. Within the range of Gaddafi's capable air defence systems and land forces once in sight of the coast, they had to fight their way into Libya, complete their mission evading lethal ground fire, before the hazardous return to Ocean. Despite Libya's state-of-the-art arsenal of ground-to-air weapons, the Apaches made nightly raids at ultra low-level behind enemy lines. 'Apache Over Libya' describes the experiences of eight Army and two Royal Navy pilots who played a significant role in the NATO led campaign. Despite fighting the best armed enemy British aircrew have faced in generations, they defied the odds and survived. Thrilling first hand action accounts vividly convey what it means to fly the Apache in combat at sea and over enemy-held terrain. An unforgettable and unique account which gives a rare insight into attack helicopter operations in war. AUTHOR: Will Laidlaw [pseudonym for security reasons] is a son of the Scottish Borders. Educated in Scotland. He was commissioned the Army Air Corps in the late 1990s and has amassed 1800 hours flying a range of helicopters including the Apache. His work has taken all round the globe and he has flown on active service in Iraq, Afghanistan and Libya. SELLING POINTS: A pilot's eye account of flying the Apache attack helicopter in combat. One of few first descriptions of the NATO intervention in 2011 Libya Civil War. Thrilling first hand action account of flying and team work against a capable and sophisticated enemy. Rare insight into what it takes to fly the most powerful attack helicopter in the world. 16 colour plates

Book Reviews - Apache Over Libya by Will Laidlaw

» Have you read this book? We'd like to know what you think about it - write a review about Apache Over Libya book by Will Laidlaw and you'll earn 50c in Boomerang Bucks loyalty dollars (you must be a Boomerang Books Account Holder - it's free to sign up and there are great benefits!)

Will Laidlaw is a son of the Scottish Borders and was educated in Scotland. He was commissioned into the Army Air Corps in the late 1990s and has amassed 1800 hours flying a range of military helicopters including the Apache. His work has taken him all round the world and he has deployed on active service in Iraq, Afghanistan and Libya.