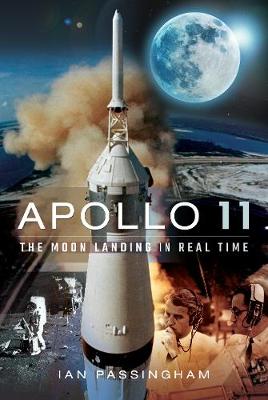 Half a century has passed since arguably the greatest feat of the twentieth century: when Neil Armstrong became the first man to walk on the Moon. Apollo 11: The Moon Landing In Real Time brings the mission back to life as never before in a thrilling day-by-day account, exploring everything from the historic flight itself to how the $24billion space programme divided a nation. Journey back in time and feel the excitement build in the days before launch and then experience the tension of the dramatic lunar landing and the relief of the crew s safe return to Earth. This engaging account mixes easily understandable explanations of the ground-breaking technology behind Apollo 11 with entertainment, excitement and humour in equal measure. Set against a backdrop of the Cold War, race riots and Vietnam, the mission polarised opinion worldwide. Alongside these issues, read long-forgotten tales including how a Chilean lawyer claimed he was the legal owner of the Moon, thousands of people signed up for proposed commercial Moon flights, Hilton revealed plans for a lunar hotel, flat Earth believers claimed the mission was a hoax and some scientists feared the astronauts would bring back deadly germs from space which would devastate mankind. AUTHOR: Ian Passingham has worked for the last 25 years as a national newspaper staff journalist after starting his career in the local press in Essex as a reporter, news editor and sports editor. His previous book, 66: The World Cup In Real Time, was published in 2016. 50 colour and b/w images

Other Editions - Apollo 11: The Moon Landing in Real Time by Ian Passingham » Have you read this book? We'd like to know what you think about it - write a review about Apollo 11: The Moon Landing in Real Time book by Ian Passingham and you'll earn 50c in Boomerang Bucks loyalty dollars (you must be a Boomerang Books Account Holder - it's free to sign up and there are great benefits!)


A Preview for this title is currently not available.
More Books By Ian Passingham
View All