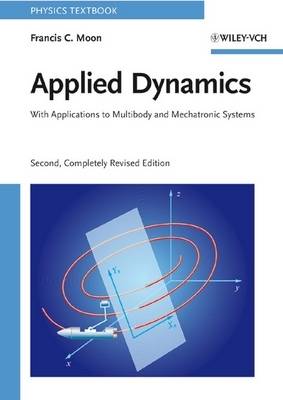 For almost a decade now, this textbook had been at the forefront in using modern analytical and computational codes and in addressing novel developments. Already used by numerous institutions for their courses, this second edition has been substantially revised, with new sections on biomechanics and micro- and nanotechnology. There is also more coverage of robotics, multibody simulations and celestial mechanics. Numerous examples have been added and problems, partly using MATLAB, have been included.

» Have you read this book? We'd like to know what you think about it - write a review about Applied Dynamics book by Francis C. Moon and you'll earn 50c in Boomerang Bucks loyalty dollars (you must be a Boomerang Books Account Holder - it's free to sign up and there are great benefits!)

Francis C. Moon is professor of mechanical and aerospace engineering at Cornell University, NY, USA. He has been in the Sibley School of Mechanical and Aerospace Engineering since 1987, having served as its director until 1992. He also served as the Chair of Theoretical and Applied Mechanics for seven years after joining Cornell in 1975. He was Assistant Professor at Princeton University in Aerospace and Mechanical Engineering from 1967-1974. Professor Moon has worked in a wide spectrum of problems including nonlinear and chaotic vibrations, superconducting bearings, electromagnetic launchers, smart structures, fluid-elastic vibrations, and dynamics of machines. He has written several papers on 19th century kinematic and dynamics of machines and has five patents in magneto-mechanical devices. Professor Moon has published nearly 140 journal articles as well as 6 books and 3 edited books. He is the author of Chaotic and Fractal Dynamics and Superconducting Bearings and Levitation, and editor of Dynamics and Chaos in Manufacturing Processes. All titles are available from Wiley. Francis Moon has won the 2007 Lyapunov Award from the American Society of Mechanical Engineers (ASME) in recognition of lifetime contributions to the field of applied nonlinear dynamics.

A Preview for this title is currently not available.
More Books By Francis C. Moon
View All