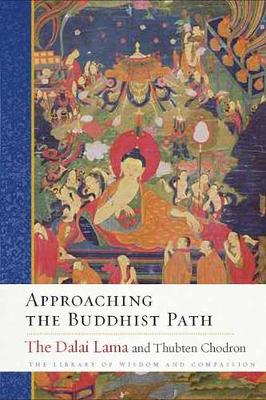 His Holiness the Dalai Lama

Description - Approaching the Buddhist Path by His Holiness the Dalai Lama

» Have you read this book? We'd like to know what you think about it - write a review about Approaching the Buddhist Path book by His Holiness the Dalai Lama and you'll earn 50c in Boomerang Bucks loyalty dollars (you must be a Boomerang Books Account Holder - it's free to sign up and there are great benefits!)

His Holiness the Dalai Lama, Tenzin Gyatso, was born in 1935 in rural eastern Tibet and recognized as a toddler as the reincarnation of the Thirteenth Dalai Lama. Groomed to be a Buddhist scholar monk and the leader of his people, his life changed dramatically when his homeland was occupied by Chinese Communist forces in the 1950s. Fleeing to India with thousands of his fellow Tibetans, he helped reestablish cultural institutions in exile and went on to become an inspiration and force for peace worldwide for his unyielding commitment to nonviolence, dialogue, and universal ethics. Winner of the Nobel Peace Prize, he is the now in his eighties and continues to travel and teach extensively. Thubten Chodron has been a Buddhist nun since 1977. A graduate of UCLA, she is founder and abbess of Sravasti Abbey in Washington State. She is a popular speaker and a bestselling author of numerous books, including Buddhism for Beginners.

A Preview for this title is currently not available.
More Books By His Holiness the Dalai Lama
View All