The Metamorphoses or Golden Ass of Apuleius (ca. 170 CE) is a Latin novel written by a native of Madauros in Roman North Africa, roughly equal to modern Tunisia together with parts of Libya and Algeria. Apuleius' novel is based on the model of a lost Greek novel; it narrates the adventures of a Greek character with a Roman name who spends the bulk of the novel transformed into an animal, traveling from Greece to Rome only to end his adventures in the capital city of the empire as a priest of the Egyptian goddess Isis. Apuleius' Florida and Apology deal more explicitly with the African provenance and character of their author while also demonstrating his complex interaction with Greek, Roman, and local cultures. Apuleius' philosophical works raise other questions about Greek vs. African and Roman cultural identity.

Apuleius in Africa addresses the problem of this intricate complex of different identities and its connection to Apuleius' literary production. It especially emphasizes Apuleius' African heritage, a heritage that has for the most part been either downplayed or even deplored by previous scholarship. The contributors include philologists, historians, and experts in material culture; among them are some of the most respected scholars in their fields. The chapters give due attention to all elements of Apuleius' oeuvre, and break new ground both on the interpretation of Apuleius' literary production and on the culture of the Roman Empire in the second century. The volume also includes a modern, sub-Saharan contribution in which "Africa" mainly means Mediterranean Africa.

Other Editions - Apuleius and Africa by Benjamin Todd Lee 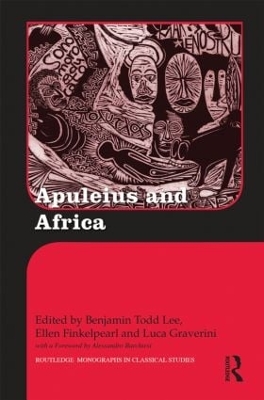 » Have you read this book? We'd like to know what you think about it - write a review about Apuleius and Africa book by Benjamin Todd Lee and you'll earn 50c in Boomerang Bucks loyalty dollars (you must be a Boomerang Books Account Holder - it's free to sign up and there are great benefits!)


A Preview for this title is currently not available.
More Books By Benjamin Todd Lee
View All