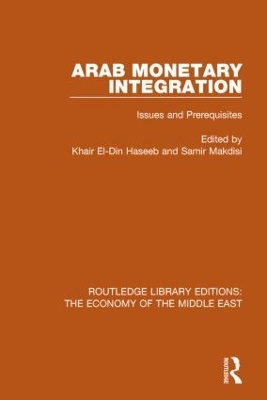 Pre-eminent among the requisites for economic integration is monetary integration. It is the premise of the chapters in this book that if the Arab world is to achieve a closer degree of cooperation in economic and political spheres, the issue of monetary integration must be given much more attention. To this end the contributors to this book, who include well-known academics and economic experts from the Arab countries, Europe, the USA and Latin America, have looked at the experience of other areas of the world which have introduced monetary unity. They consider the experiences of Western Europe, Latin America and Western Africa, evaluating them with the objective of focusing on the various major issues which have to be coped with when planning for closer monetary cooperation. While the analysis concerning the scope for future Arab monetary integration revealed varying positions as to the factors which should be stressed and the pre-requisites which should be fulfilled, there emerged general agreement on certain major issues including the following: at the present time the Arab countries should strive to achieve partial rather than full monetary integration and to create the requisite conditions for such a move; economic and monetary integration should be viewed as mutually reinforcing rather than as successive processes; and the political will to achieve integration is a major pre-requisite for any move in that direction. » Have you read this book? We'd like to know what you think about it - write a review about Arab Monetary Integration book by Khair El-Din Haseeb and you'll earn 50c in Boomerang Bucks loyalty dollars (you must be a Boomerang Books Account Holder - it's free to sign up and there are great benefits!)