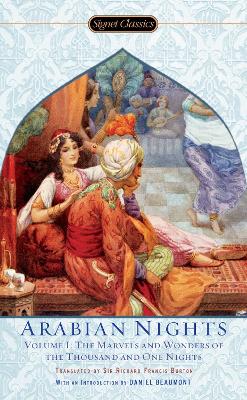 The Marvels and Wonders of the Thousand and One Nights

Including "Ali Baba and the Forty Thieves," and "Aladdin and the Magic Lamp," this modern edition of the classic tales weaves a beautiful tapestry of stories that are filled with humorous and valuable lessons and magical adventures. Reissue.

» Have you read this book? We'd like to know what you think about it - write a review about Arabian Nights Vol.1 book by Richard F. Burton and you'll earn 50c in Boomerang Bucks loyalty dollars (you must be a Boomerang Books Account Holder - it's free to sign up and there are great benefits!)

Sir Richard Francis Burton (1821-1890) was a gifted linguist, a daring explorer, a prolific author, and one of the most flamboyant celebrities of his day. Forced to leave Oxford for unruly behavior, he joined the British Army in India, where he gained a remarkable knowledge of Arabic, Hindustani, and Persian, eventually acquiring twenty-nine languages and many dialects. He led the famed expedition to discover the source of the Nile and, disguised as a Muslim, made a pilgrimage to the city of Mecca, then forbidden to non-Muslims, and penetrated the sacred city of Harare in uncharted East Africa. Burton translated unexpurgated versions of many famous texts including the Kama Sutra (1883) and Arabian Nights (1885-88), which is perhaps his most celebrated achievement. Daniel Beaumont is an associate professor of Arabic language and literature at the University of Rochester and the author of Slave of Desire, a critical study of the Arabian Nights. He is also a teacher and scholar of the blues. Jack Zipes is a professor of German at the University of Minnesota. The author of several books on fairy tales, including Don't Bet on the Prince, Fairy Tales and the Art of Subversion, and Breaking the Magic Spell, he is the editor and translator of The Complete Tales of the Brothers Grimm and the editor of Signet Classics's The Complete Fairy Tales of Oscar Wilde.

A Preview for this title is currently not available.
More Books By Richard F. Burton
View All