The early Arab conquests pose a considerable challenge to modern-day historians. The earliest historical written tradition emerges only after the second half of the eighth century- over one hundred years removed from the events it contends to describe, and was undoubtedly influenced by the motives and interpretations of its authors. Indeed, when speaking or writing about the past, fact was not the only, nor even the prime, concern of Muslims of old.

The Arabic Historic Tradition and the Early Islamic Conquests presents a thorough examination of Arabic narratives on the early Islamic conquests. It uncovers the influence of contemporary ideology, examining recurring fictive motifs and evaluating the reasons behind their use. Folklore and tribal traditions are evident throughout the narratives, which aimed to promote individual, tribal and regional fame through describing military prowess in the battles for the spread of Islam. Common tropes are encountered across the materials, which all serve a central theme; the moral superiority of the Muslims, which destined them to victory in God's plan.

Offering a key to the state of mind and agenda of early Muslim writers, this critical reading of Arabic texts would be of great interest to students and scholars of early Arabic History and Literature, as well as a general resource for Middle Eastern History. 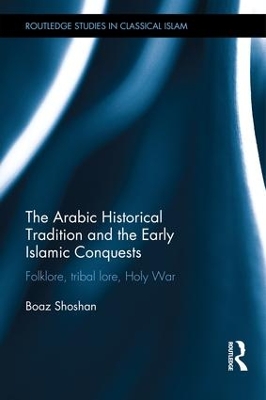 » Have you read this book? We'd like to know what you think about it - write a review about Arabic Historical Tradition & the Early Islamic Conquests book by Boaz Shoshan and you'll earn 50c in Boomerang Bucks loyalty dollars (you must be a Boomerang Books Account Holder - it's free to sign up and there are great benefits!)

Boaz Shoshan is professor at Ben Gurion University of the Negev where he has also served as chair of the General History department. His research focuses on the historiography of early Islam and the history of the Mamluk period.

A Preview for this title is currently not available.
More Books By Boaz Shoshan
View All