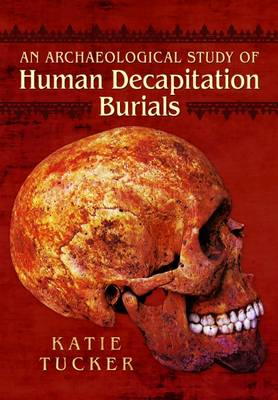 This is an in depth yet accessible study of human decapitation burials in Roman Britain. Dr Katie Tucker studied this subject for her doctorate and so is a leading expert in the area. Her findings go against conventional views of human decapitation burials of this period, which traditionally favour the view of a post-mortem removal of the head. Instead, Katie found the majority of the evidence did not support this theory and so concluded that most decapitations were likely to have been performed prior to death, potentially as a result of execution or human sacrifice. In order to gain a full insight into the ways in which these burials were formed and the reasoning behind these practices, Katie compares the decapitation burials to the burials of the wider Romano-British cemetery population. In doing this, Katie is able to better understand the differences between decapitated individuals and the rest of the population in terms of burial practice, demographics and ante-mortem health status. Decapitation burials are not only confined to the Roman period and so Katie also discusses the context of them in the Neolithic, Bronze Age, Iron Age, Early Medieval, Medieval and Post Medieval periods in order to assess whether there is continuity between periods. SELLING POINTS: A brand new and controversial view on decapitation burials. Katie deviates from the normal view of a post-mortem removal of the head and suggests execution and human sacrifice. This is an accessible version of Katie's PhD thesis so all work is up to date and at the forefront of research. This book also provides context of decapitation burials in other periods, such as the Neolithic, Bronze Age, Iron Age, Early Medieval, Medieval and Post Medieval periods. 60 illustrations in colour plate section

» Have you read this book? We'd like to know what you think about it - write a review about Archaeological Study of Human Decapitation Burials book by Katie Tucker and you'll earn 50c in Boomerang Bucks loyalty dollars (you must be a Boomerang Books Account Holder - it's free to sign up and there are great benefits!)

Katie Tucker is a Post-Doctoral Fellow in Human Bioarchaeology at the University of Winchester and a freelance osteologist, currently living and working in Berlin. She has many years of experience in the excavation and analysis of human remains from all periods and site types. Katie's current projects include a detailed study of the skeletal remains from the leprosy hospital of St Mary Magdalen, The Archaeology of the Dead in Ethiopia in collaboration with SOAS, cemetery excavations in Romania for Transylvanian Bioarchaeology, and the analysis of commingled human remains from Neolithic sites in Jordan in collaboration with the German Archaeological Institute.

A Preview for this title is currently not available.
More Books By Katie Tucker
View All