Archaeologies of Presence is a brilliant exploration of how the performance of presence can be understood through the relationships between performance theory and archaeological thinking. Drawing together carefully commissioned contributions by leading international scholars and artists, this radical new work poses a number of essential questions: What are the principle signifiers of theatrical presence? How is presence achieved through theatrical performance? What makes a memory come alive and live again? How is presence connected with identity? Is presence synonymous with 'being in the moment'? What is the nature of the 'co-presence' of audience and performer? Where does performance practice end and its documentation begin? Co-edited by performance specialists Gabriella Giannachi and Nick Kaye, and archaeologist Michael Shanks, Archaeologies of Presence represents an innovative and rewarding feat of interdisciplinary scholarship.

Other Editions - Archaeologies of Presence by Gabriella Giannachi 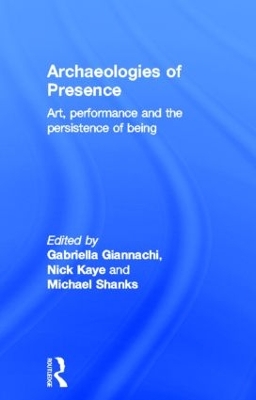 » Have you read this book? We'd like to know what you think about it - write a review about Archaeologies of Presence book by Gabriella Giannachi and you'll earn 50c in Boomerang Bucks loyalty dollars (you must be a Boomerang Books Account Holder - it's free to sign up and there are great benefits!)

Gabriella Giannachi is Professor in Performance and New Media, and Director of the Centre for Intermedia at the University of Exeter. Her book publications include: Virtual Theatres: an Introduction (2004); Performing Nature: Explorations in Ecology and the Arts, ed. with Nigel Stewart (2005); The Politics of New Media Theatre (2007); Performing Presence: Between the Live and the Simulated, co-authored with Nick Kaye (2011); and Performing Mixed Reality, with Steve Benford (2011). Nick Kaye is Dean of the College of Humanities and Professor of Performance Studies, at the University of Exeter. His books include: Postmodernism and Performance (1994), Art into Theatre: Performance Interviews and Documents (1996), Site-Specific Art: Performance, Place and Documentation (2000), Staging the Post-Avant-Garde: Italian Performance After 1970, with Gabriella Giannachi (2002), Multi-media: video - installation - performance (2007) and Performing Presence: Between the Live and the Simulated, with Gabriella Giannachi, (2011). He is co-director of REACT, an AHRC Knowledge Exchange Hub that will invest over GBP4million in creating collaborations between academic researchers and the creative industries 2012-16. Michael Shanks is the Omar and Althea Hoskins Professor of Classics and Director of Stanford Archaeology Center's Metamedia Lab. His major book publications include: ReConstructing Archaeology (1987), Social Theory and Archaeology (1987), Art and the Greek City State (1999), Classical Archaeology: Experiences of the Discipline (1996), Experiencing the Past: On the Character of Archaeology (1992) and Theatre/Archaeology, with Mike Pearson (Routledge 2001).

A Preview for this title is currently not available.
More Books By Gabriella Giannachi
View All