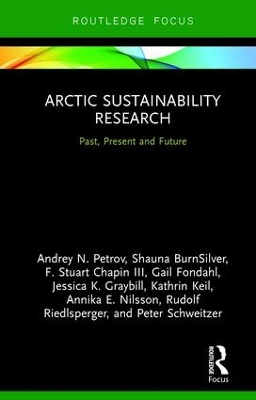 Past, Present and Future

The Arctic is one of the world's regions most affected by cultural, socio-economic, environmental, and climatic changes. Over the last two decades, scholars, policymakers, extractive industries, governments, intergovernmental forums, and non-governmental organizations have turned their attention to the Arctic, its peoples, resources, and to the challenges and benefits of impending transformations. Arctic sustainability is an issue of increasing concern as well as the resilience and adaptation of Arctic societies to changing conditions.

This book offers key insights into the history, current state of knowledge and the future of sustainability, and sustainable development research in the Arctic. Written by an international, interdisciplinary team of experts, it presents a comprehensive progress report on Arctic sustainability research. It identifies key knowledge gaps and provides salient recommendations for prioritizing research in the next decade.

Arctic Sustainability Research will appeal to researchers, academics, and policymakers interested in sustainability science and the practices of sustainable development, as well as those working in polar studies, climate change, political geography, and the history of science. 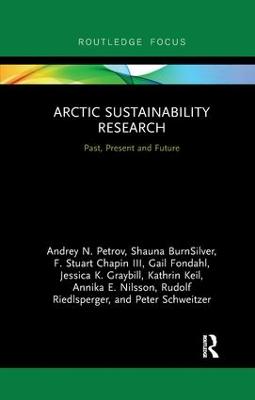 » Have you read this book? We'd like to know what you think about it - write a review about Arctic Sustainability Research book by Andrey N. Petrov and you'll earn 50c in Boomerang Bucks loyalty dollars (you must be a Boomerang Books Account Holder - it's free to sign up and there are great benefits!)

Andrey N. Petrov is Director of the ARCTICenter and Associate Professor of Geography at the University of Northern Iowa, USA. His expertise is in economic geography and regional development in the Arctic, sustainability science, social indicators, impacts of development, benefit sharing, and sustainable economy in remote regions. He co-edited Arctic Social Indicators: Implementation (2015) and authored more than 40 publications on Arctic issues. Dr Petrov leads three NSF projects focused on resilience and sustainability. He also holds leadership roles in the International Arctic Social Sciences Association, International Arctic Science Committee and American Association of Geographers. Shauna BurnSilver is an Environmental Anthropologist who studies how socio-economic and climate changes affect relationships between people and the natural resources they depend on. Key questions of interest are how households, communities, and stakeholders define concepts of "well-being", "progress", "development" and "sustainability" given the intersection of strong socio-economic and political changes and long-term cultural histories of land use in particular landscapes, and how these perspectives translate into decisions within mixed economies at the scale of households and communities that matter for sustainability outcomes. She has worked in Arctic Alaska, Inner Mongolia, China, and Africa.ã F. Stuart Chapin III is Professor Emeritus of Ecology at the University of Alaska Fairbanks. His research addresses the effects of changes in climate and wildfire on Alaskan ecology and rural communities. He also collaborates with communities and agencies to develop options that increase sustainability of ecosystems and human communities over the long term despite rapid climatic and social changes. His research in earth stewardship explores ways that society can proactively shape changes toward a more sustainable future through actions that enhance ecosystem resilience and human well-being. Gail Fondahl is a Professor of Geography at the University of Northern British Columbia, Canada. Her PhD is from the University of California-Berkeley. Professor Fondahl's research focuses on the legal geographies of indigenous territorial rights in the Russian North and the cultural and governance dimensions of Arctic sustainability. She serves as Canada's representative to, and Chair of, the International Arctic Science Committee's Social & Human Sciences Working Group. Dr Fondahl was president of the International Arctic Social Sciences Association (2011-2014) and remains on IASSA's governing council. She co-edited the second Arctic Human Development Report (AHDR-II). Jessica K. Graybill is a Human Ecologist and Associate Professor of Geography and Director of the Russian & Eurasian Studies Program at Colgate University. Her focus in Eurasia is on the Far East and North where she conducts research related to resource use, extraction, and climate change in the Russian Far East and North. Currently, she is a co-principal investigator on two National Science Foundation grants in Arctic resilience and sustainability. She is also an interdisciplinary research methodologist. Recent publications include Urban Climate Vulnerability and Governance in the Russian North (2015) and Cities of the World, Sixth Edition (2016). Kathrin Keil is a Scientific Project Leader at the Institute for Advanced Sustainability Studies (IASS) in Potsdam, Germany, where she leads the Arctic research project GloCAST (Global Change and Arctic Sustainable Transformations). GloCAST uses the Arctic as a prominent case to illustrate interrelations between global and regional change processes and between stakeholders from within and outside the Arctic. Kathrin received her PhD in Political Science from the Freie Universitat Berlin. She is Senior Fellow of The Arctic Institute - Center for Circumpolar Security Studies and part of the German delegation to the Sustainable Development Working Group of the Arctic Council. Annika E. Nilsson is Senior Research Fellow at Stockholm Environment Institute and Affiliated Faculty in Environmental Politics at KTH Royal Institute of Technology. Her work focuses on the politics of Arctic change, with research on environmental governance, communication at the science-policy interface, and the relationship between resource extraction and sustainable Arctic communities. She has participated in several scientific assessments under the auspices of the Arctic Council. Nilsson received her PhD in environmental science in 2007 following on a 20-year career as a science journalist. Rudolf Riedlsperger is a PhD candidate (Geography) at Memorial University of Newfoundland in St John's, Canada. His research interests revolve around sustainable community development. A particular focus is on sustainable public housing in Arctic and Subarctic regions, viewed both from a physical and sociocultural perspective. Peter Schweitzer is Professor at the Department of Social and Cultural Anthropology at the University of Vienna and Professor Emeritus at the University of Alaska Fairbanks. His theoretical interests range from kinship and identity politics to human-environmental interactions, including the community effects of global climate change, and his regional focus areas include the circumpolar North and the former Soviet Union. Schweitzer is past President of the International Arctic Social Sciences Association, past Chair of the Social and Human Sciences Working Group of the International Arctic Science Committee, and currently the Director of the Austrian Polar Research Institute.

A Preview for this title is currently not available.
More Books By Andrey N. Petrov
View All

Arctic Sustainability, Key Methodologies and Knowledge Domains: A Synthesis of Knowledge I
$85.49 $94.99