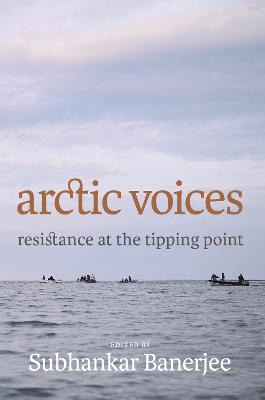 A powerful collection of voices and images from the frontlines of the war against ecological devastation in the Arctic. First-person narratives from nearly prominent activists, writers and researchers who address issues of climate change, resource war and human rights with stunning urgency and groundbreaking research. Over recent years the Arctic has been a battleground for an international war over natural resources and it still remains one of the most contested lands in the world. Arctic Voices is a window into this beautiful, endangered region.

Other Editions - Arctic Voices: Resistance At The Tipping Point by Subhankar Banerjee » Have you read this book? We'd like to know what you think about it - write a review about Arctic Voices: Resistance At The Tipping Point book by Subhankar Banerjee and you'll earn 50c in Boomerang Bucks loyalty dollars (you must be a Boomerang Books Account Holder - it's free to sign up and there are great benefits!)

Over the past decade SUBHANKAR BANERJEE has been a leading international voice on issues of arctic conservation, indigenous human rights, resource development, and climate change. In 2003 he published "Arctic National Wildlife Refuge," a photo book of his fourteen-month long journey in the Arctic National Wildlife Refuge. Through a Lannan Foundation grant, 10,000 copies of the book were donated to libraries and policy makers across the country. He was recently Director's Visitor at the Institute for Advanced Study in Princeton, Distinguished Visiting Professor at Fordham University in New York. He has received a Distinguished Alumnus Award from New Mexico State University and a Cultural Freedom Award from Lannan Foundation. Banerjee lives in New York City. "From the Trade Paperback edition."

A Preview for this title is currently not available.
More Books By Subhankar Banerjee
View All