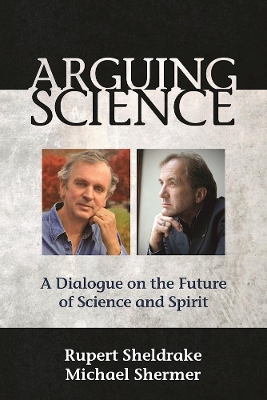 A Dialogue on the Future of Science and Spirit

Two controversial authors debate the nature and methods of science, its dogmas, and its future. Rupert Sheldrake argues that science needs to free itself from materialist dogma while Michael Shermer contends that science, properly conceived, is a materialistic enterprise; for science to look beyond materialist explanations is to betray science and engage in superstition. Issues discussed include: materialism and its role in science, whether belief in God is compatible with a scientific perspective, and parapsychology. Michael Shermer is Editor-in-Chief of "Skeptic "magazine and the author of numerous books including "Skeptic."Rupert Sheldrake is a biologist and author of ten books including his most recent, "Science Set Free," which challenges scientific dogma.

» Have you read this book? We'd like to know what you think about it - write a review about Arguing Science book by Rupert, Ph.D. Sheldrake and you'll earn 50c in Boomerang Bucks loyalty dollars (you must be a Boomerang Books Account Holder - it's free to sign up and there are great benefits!)

Michael Shermer: Michael Brant Shermer is an American science writer, historian of science, founder of The Skeptics Society, and Editor in Chief of its magazine Skeptic, which is largely devoted to investigating pseudoscientific and supernatural claims Rupert Sheldrake, a biologist and author, is best known for his hypothesis of morphic fields and morphic resonance, which leads to a vision of a living, developing universe with its own inherent memory. He worked in developmental biology at Cambridge University, where he was a Fellow of Clare College. He was then Principal Plant Physiologist at the International Crops Research Institute for the Semi-Arid Tropics (ICRISAT), in Hyderabad, India. From 2005 to 2010 he was Director of the Perrott-Warrick project, funded from Trinity College, Cambridge.

A Preview for this title is currently not available.
More Books By Rupert, Ph.D. Sheldrake
View All