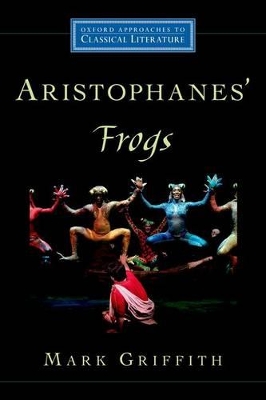 Aristophanes is widely credited with having elevated the classical art of comedy to the level of legitimacy and recognition that only tragedy had hitherto achieved, and producing some of the most intriguing works of literature to survive from classical Greece in the process. Among them, Frogs has a unique appeal; written and performed in 405 BCE, the comedy won first prize in that year's Lenaea festival competition and was re-performed soon thereafter--a rare occurrence for comedies at the time. Frogs has been admired and quoted by readers and critics ever since, a testament to its timeless appeal; it remains among the most approachable of Aristophanes' plays, as well as perhaps the richest of all in insights it provides into ancient Greek cultural attitudes and values.

Mark Griffith's study of the Frogs is the first single book to offer a reliable and sophisticated account of this play in light of modern notions of culture, performance, democracy, religion, and aesthetics. After placing the work in its original historical, cultural, and biographical context, Griffith goes on to underscore the originality of Frogs in relation to parallel developments in the tragedies of Aeschylus and Euripides, among others. He highlights the play's unique portrayal of the figure of Dionysus, the Eleusinian mystery cult, and the question of life after death. This title provides not only a detailed analysis of the play and a concise account of its reception, but also a succinct introduction to ancient Greek comedy, exploring the extraordinary range of theatrical conventions, moral and aesthetic assumptions, and religious beliefs that underlie the action of Aristophanes' play. The book provides an invaluable companion to Aristophanes and the theater of classical Greece for students and general readers alike. » Have you read this book? We'd like to know what you think about it - write a review about Aristophanes' Frogs book by Mark Griffith and you'll earn 50c in Boomerang Bucks loyalty dollars (you must be a Boomerang Books Account Holder - it's free to sign up and there are great benefits!)


A Preview for this title is currently not available.
More Books By Mark Griffith
View All