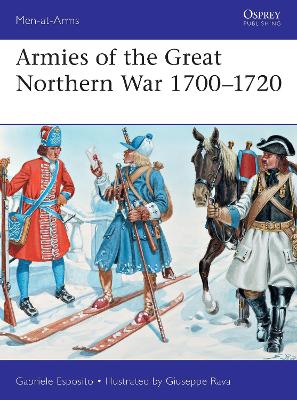 The Great Northern War was a long series of campaigns in which Russia, linked with several other countries in temporary alliances, confronted and eventually replaced Sweden as the predominant power in Northern Europe. While contemporary with the Duke of Marlborough's pivotal campaigns against France, the Great Northern War was in fact more decisive, since it reshaped the Northern European power balance up to the eve of the Napoleonic Wars.
It began with a series of astonishing Swedish victories lead by King Charles XII, from Denmark to Poland and deep into Germany. But Peter the Great of Russia showed steadfast determination, and Charles overreached himself when he invaded Russia in 1708; the Russians adopted classic 'scorched earth' tactics until they could destroy the Swedish army at Poltava in 1709, one of the most overwhelming victories in history. Nevertheless, Sweden continued to fight, and frequently win, in Germany, Denmark and Norway, until Charles's death in battle in 1718, though the war itself did not conclude until 1721.
This study explores, in detail, the numerous armies and complex alliances engaged in the war for Northern European dominance. Containing accurate full-colour artwork and unrivalled detail, Armies of the Great Northern War offers a vivid insight into the troops which battled for control of the North.

» Have you read this book? We'd like to know what you think about it - write a review about Armies of the Great Northern War 1700-1720 book by Gabriele Esposito and you'll earn 50c in Boomerang Bucks loyalty dollars (you must be a Boomerang Books Account Holder - it's free to sign up and there are great benefits!)