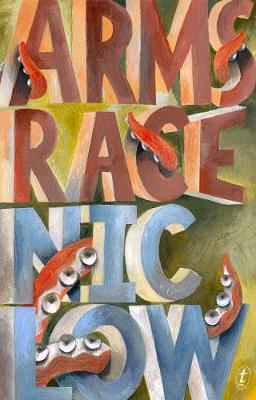 Data theft, internet memes, advertising, terrorism, indigenous sovereignty, drone warfare, opium addiction, syphilis, the moon landing, mining, oil slicks, climate change, giant octopuses- nothing is spared in this collection. Nic Low's stories go beyond satire, aiming for the dark heart of our collective obsession with technology, power and image. Set variously in London, an Indian village, remote Mongolia, the West Australian outback and mountainous New Zealand, these are prescient visions of the future and outlandish reimaginings of the past. Arms Race is an arresting debut from a fierce, playful new voice in Australian writing.

» Have you read this book? We'd like to know what you think about it - write a review about Arms Race & Other Stories book by Nic Low and you'll earn 50c in Boomerang Bucks loyalty dollars (you must be a Boomerang Books Account Holder - it's free to sign up and there are great benefits!)

Arms Race is a book of twelve short stories by New Zealand-born author and artist, Nic Low. The settings are as varied as the subject matter, although a few of the stories have common elements or themes that draw tenuous links between them. Octopus, the first story, is set in New Zealand and feels like the first chapter of a longer work. Making It proposes an interesting link between syphilis and art, and its mix of humour and the yuk factor will cause readers to laugh and squirm simultaneously. Photocopy Planet is a hilarious look at a well-known travel guide. Rush is irreverent, funny and delightfully satirical. There is a post-apocalyptic feel to Data Furnace and How Much Courage; Slick looks at the power of advertising in a unique way; Facebook Redux is a cautionary tale that explores information sharing and data mining; Arms Race takes the idea of drone warfare to an unexpected extreme; The Culler is an amusing look at the First Moon Landing that will leave the reader wondering. In this little bag of literary gems from Nic Low there are some real diamonds for readers: The Culler, Photocopy Planet, Scar and Rush. It is no surprise that Rush was shortlisted for the 2012 Commonwealth Short Story Prize and runner-up for the 2013 Overland Victoria University Short Story Prize. Low treats the reader to tales that are sharp, funny and thought-provoking. An amazing debut.

Nic Low is an author and artist of Ngai Tahu and European descent. Born in Christchurch, he now divides his time between Melbourne and a bush retreat near Castlemaine. Nic's fiction, essays and criticism have appeared in the Big Issue, Monthly, Griffith REVIEW, Lifted Brow, Art Monthly and Australian Book Review, and until recently he ran Asialink's international writing program. His second book, a literary exploration of New Zealand's Southern Alps, will be published by Text in 2016.