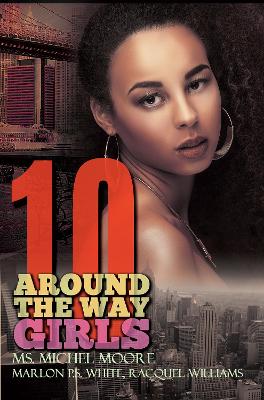 Around The Way Girls 10

Description - Around The Way Girls 10 by Michel Moore

There's a saying that if you come from my part of town, you're from around the way. Around the Way Girls 10, like its predecessors, is a fast-paced look at the lives of some street-smart women who think they know it all, but are about to get the lessons of their lives."What doesn't kill you only makes you stronger." For Katara, that statement is the furthest thing from the truth. Dealing with her mother's cancer, a special needs child, and a physically abusive husband that cheats on her at will, she is slowly losing her mind. Finally fed up with the tortured life she feels forced to live, Katara attempts suicide. What she thought would be an easy escape from reality soon turns out to be a fate she wouldn't wish on her worst enemy.
Shay isn't for the games when it comes to self-preservation. Being abused by her stepfather since the age of ten, the teen has finally had enough. Her mother chooses not to listen to her pleas for help, which becomes a deadly mistake. Shay is soon arrested for manslaughter and sent away until her twenty-first birthday. Once she's released back on the streets of Detroit, Shay is a ticking time bomb waiting to explode, as she vows to never let anything or anyone hurt her again.
Ajanay Holmes, Sheika Jones, and London Smith were born and raised in Whitcomb Courts, one of Richmond, Virginia's most ruthless housing projects. Faced with horrific home lives, all three girls turn to the streets and each other for comfort. Ajanay concocts a plan for them to use their voluptuous bodies and their sharp mouths to get money out of Amir, one of the biggest dope boys from a rival housing project. However, Amir is a stone-cold killer with a long criminal history, and she has put them in harm's way with no solid plan on how to escape. Will their love and loyalty for one another keep them together, or is it every woman for herself?

Other Editions - Around The Way Girls 10 by Michel Moore Book Reviews - Around The Way Girls 10 by Michel Moore

» Have you read this book? We'd like to know what you think about it - write a review about Around The Way Girls 10 book by Michel Moore and you'll earn 50c in Boomerang Bucks loyalty dollars (you must be a Boomerang Books Account Holder - it's free to sign up and there are great benefits!)

Ms. Michel Moore is the sole founder of Say U Promise Publications. She is dedicated to investing back into her community. A respected businesswoman and Detroit activist, she has reached goals that once looked unattainable. Follow Ms. Moore on Twitter at @DETROIT AUTHOR. Ms. Michel Moore resides in Detroit, MI.