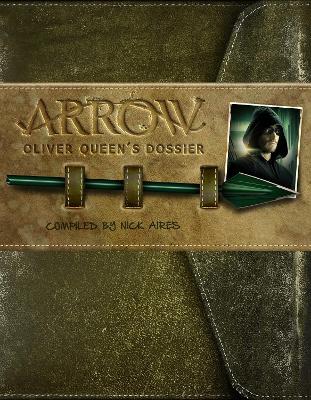 Arrow - Oliver Queen's Dossier collates the intelligence Oliver Queen has uncovered on nefarious business dealings and criminal activity in Starling City, with "top secret" records on his alter-ego Arrow since his return from Lian Yu. Includes hard copy duplicates of confidential government and business documents acquired by Oliver and Felicity Smoak, top secret schematics for Arrow's weaponry, and Queen family records. Arrow is based on the DC Comics character Green Arrow. The series follows billionaire playboy Oliver Queen, portrayed by Stephen Amell (Private Practice, Heartland), who, after five years of being stranded on a hostile island, returns home to fight crime and corruption as a secret vigilante whose weapon of choice is a bow and arrow.

» Have you read this book? We'd like to know what you think about it - write a review about Arrow - Oliver Queen's Dossier book by Nick Aires and you'll earn 50c in Boomerang Bucks loyalty dollars (you must be a Boomerang Books Account Holder - it's free to sign up and there are great benefits!)

Nick Aires is the pen-name of Nick Andreychuk, a seasoned fiction and non-fiction writer in the genres of fantasy and horror, contributor to the official "Supernatural Magazine," and author of "Arrow: Heroes and Villains "and" "the "Official Companions" to seasons 1-7 of "Supernatural." He has also worked as an extra on numerous Vancouver-based TV shows.

A Preview for this title is currently not available.
More Books By Nick Aires
View All