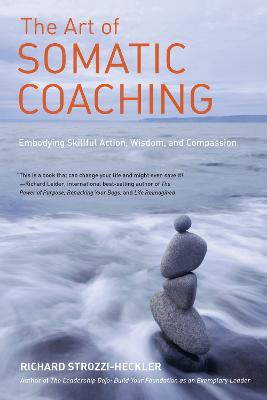 The Art Of Somatic Coaching

Description - The Art Of Somatic Coaching by Richard Strozzi-Heckler

"The Art of Somatic Coaching introduces the concepts and principles of coaching with practices that include body awareness, bodywork, and mindfulness for both the coach and the client. Author and expert coach, Richard Strozzi-Heckler, PhD, explains that in order to achieve truly sustainable changes in individuals, teams, and organizations, it is necessary to implement body-oriented somatic practices in order to dissolve habits, behaviors, and interpretations of the world that are no longer relevant. He explains that these ways of being are integrated in the body--at the level of the musculature, organs, and nervous system. By implementing a somatic approach, these patterns can be shifted in order for transformation to occur. pening with a discussion of the roots of Somatic Coaching, the book describes the emotional and physical cost of being distanced from our bodies. Originating from the rationalistic idea that the mind and body are separate, this sense of disconnection spurred the emergence of the field of somatics that views the body as not just a physiological entity, but as the center of our lived experience in the world. Out of this philosophy, Somatic Coaching was

Book Reviews - The Art Of Somatic Coaching by Richard Strozzi-Heckler

» Have you read this book? We'd like to know what you think about it - write a review about Art Of Somatic Coaching book by Richard Strozzi-Heckler and you'll earn 50c in Boomerang Bucks loyalty dollars (you must be a Boomerang Books Account Holder - it's free to sign up and there are great benefits!)

Named one of the top fifty executive coaches worldwide in the landmark resource The Art and Practice of Leadership Coaching, RICHARD STROZZI-HECKLER, PhD, an internationally known speaker, coach, and consultant on leadership and mastery, is the president of the Strozzi Institute, which offers consulting and coaching services to individuals and companies on five continents. Over the past forty years he has coached thousands of individuals from Fortune 500 companies, NGOs, technology start-ups, nonprofits, the U.S. government, and the military.