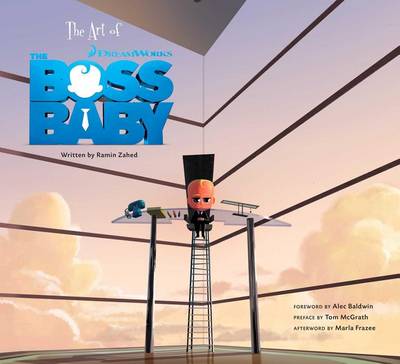 Art of The Boss Baby

Description - Art of The Boss Baby by Zahed Ramin

A beautifully illustrated look at the art, design and making of DreamWorks Animation's upcoming movie Boss Baby, a family film about a young boy and his fast-talking, corporate-type baby who have to fight the evil plot of the CEO of Puppy Co. to save the world.

Go behind the scenes of DreamWorks Animation's smart and hilarious comedy called The Boss Baby. In one of the most anticipated comedies of 2017, a young boy named Tim feels there is something unusual about his baby brother from the day he arrives ... in a taxi, and speaking with the voice of Alec Baldwin. The two brothers embark on a sibling rivalry battle for the ages, but then must work together when an unexpected adventure takes them to places they can't imagine.


Book Reviews - Art of The Boss Baby by Zahed Ramin

» Have you read this book? We'd like to know what you think about it - write a review about Art of The Boss Baby book by Zahed Ramin and you'll earn 50c in Boomerang Bucks loyalty dollars (you must be a Boomerang Books Account Holder - it's free to sign up and there are great benefits!)

Ramin Zahed is a senior editor at Insight Editions and the former editor in chief of Animation Magazine. A journalist who has covered the film and television industries for over 20 years, his writing has appeared in Variety, the Hollywood Reporter, the Los Angeles Times, and Movieline. He is also the author of The Art of Home, The Art of Puss in Boots, The Art of Rise of the Guardians, and The Art of DreamWorks. He lives in Los Angeles.

A Preview for this title is currently not available.
More Books By Zahed Ramin
View All

Incredibuilds: Fantastic Beasts and Where to Find Them: Niffler 3D Wood Model and Booklet
$28.40 $31.56