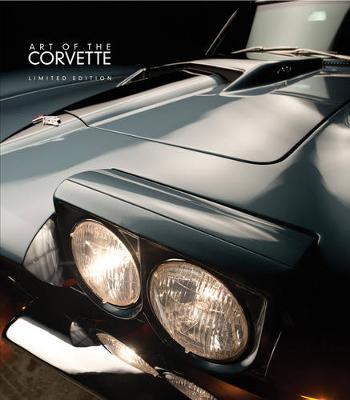 Art of the Corvette - Limited Edition

Description - Art of the Corvette - Limited Edition by Randy Leffingwell

Celebrate the Corvette, America's most iconic and best-loved sports car, with one of 500 of these limited edition volumes, each numbered and signed by the author.Chevy's Corvette is one of the most distinctive and beautiful American vehicles on the road today. With the launch of the 2014 Corvette Stingray, the seventh-generation model, Corvette fans young and old will be reminded why they love this car. Featuring key models from every Corvette generation, Art of the Corvette continues Motorbooks' popular Art of series by celebrating the iconic Corvette through high-quality studio portraits by veteran car photographers Randy Leffingwell and Tom Loeser. Only 500 units of this limited edition version will be offered, each numbered and signed by the author and encased in a special presentation box with an exclusive high-quality art print.

» Have you read this book? We'd like to know what you think about it - write a review about Art of the Corvette - Limited Edition book by Randy Leffingwell and you'll earn 50c in Boomerang Bucks loyalty dollars (you must be a Boomerang Books Account Holder - it's free to sign up and there are great benefits!)

Randy Leffingwell wrote his first book, American Muscle, in 1989 while still on staff at the Los Angeles Times. Since then, he has authored another 47 titles for Motorbooks and its sister publisher Voyageur Press, including his most recent Complete Book of Porsche 911 and Corvette 60 Years. He has just finished Porsche 911: Fifty Years, a reexamination of the 911 story based on nearly two dozen new interviews. He lives in southern California, about 100 miles north of Los Angeles. Learn more about him on his website: www.rleffingwell.com.Tom Loeser has been shooting cars since he was a child, not for money but because he loved them. His mentor was his father who took him on lots of shoots with him when he went photographing nature. Tom's working career has been varied, shooting for the California Department of Forestry and Fire Protection, now known as CAL Fire, and photographing weddings. He went to Los Angeles Trade Technology College for photography for three years and followed that with two years at Platt College studying graphic design. That led to a job running Z-Cube, a digital photo lab, from 1996 to early 1998. Then a Los Angeles-based trade show company hired him to design their booths and graphics, he was stolen away by a competitor to do the same job. In 2002, the Long Beach Grand Prix took him on as photographer and graphic designer and that continued a year until Northrup Grumman Corporation stole him to do photography, covering everything from grip-and-grins to stuff he cannot talk about. Tom kept his ties with the Grand Prix, returning as photographer and then chief photographer for race weekends through the present. He left Northrup in 2012 to begin a freelance career. Art of the Corvette is his first book.

A Preview for this title is currently not available.
More Books By Randy Leffingwell
View All