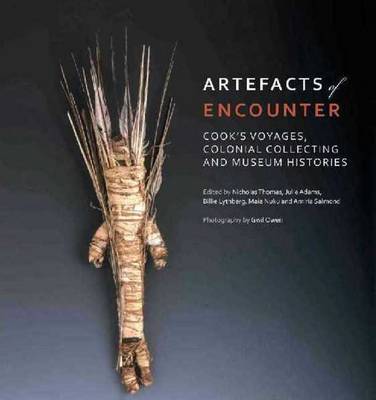 The Pacific artefacts and works of art collected during the three voyages of Captain James Cook are of foundational importance for the study of art and culture in Oceania. These collections are representative not only of technologies or belief systems but of indigenous cultures at the formative stages of their modern histories, and exemplify Islanders' institutions, cosmologies and social relationships. Recently, scholars from the Pacific and further afield, working with Pacific artefacts at the Museum of Archaeology and Anthropology in Cambridge (MAA), have set out to challenge and rethink some longstanding assumptions on their significance. The Cook voyage collection at the MAA is among the four or five most important in the world, containing over 200 of the 2000-odd objects with Cook voyage provenance that are dispersed throughout the world. The collection includes some 100 artefacts dating from Cook's first voyage. This stunning book catalogues this collection, and its cutting-edge scholarship sheds new light on the significance of many artefacts of encounter. Photographs by Gwil Owen

» Have you read this book? We'd like to know what you think about it - write a review about Artefacts of Encounter book by Thomas Nicholas and you'll earn 50c in Boomerang Bucks loyalty dollars (you must be a Boomerang Books Account Holder - it's free to sign up and there are great benefits!)

Nicholas Thomas is Director of the Museum of Archaeology and Anthropology, University of Cambridge. He has since written extensively on art, empire and related themes, and curated exhibitions in Australia, New Zealand and the UK, many in collaboration with contemporary artists. His early book, Entangled Objects (1991), influentially contributed to a revival of material culture studies. He went on to publish, among other works, Oceanic Art (1995) in the Thames and Hudson World of Art series and Islanders: The Pacific in the Age of Empire (2010), which was awarded the Wolfson History Prize. Amiria Salmond is a curator and lecturer at the University of Cambridge. She has produced exhibitions at the Tairawhiti Museum in New Zealand, and studies and practises Maori weaving. Her book Museums, Anthropology and Imperial Exchange has been published by Cambridge University Press and a co-edited volume, Thinking through things: theorising artefacts ethnographically, has recently been published by Routledge.

A Preview for this title is currently not available.
More Books By Thomas Nicholas
View All

Annals and Antiquities of the Counties and County Families of Wales; Containing a Record of All Ranks of the Gentry ... with Many Ancient Pedigrees and Memorials of Old and Extinct Families; Volume 1
$94.99 $105.54

Annals and Antiquities of the Counties and County Families of Wales: Containing a Record of All Ranks of the Gentry ... with Many Ancient Pedigrees and Memorials of Old and Extinct Families
$98.95 $109.94