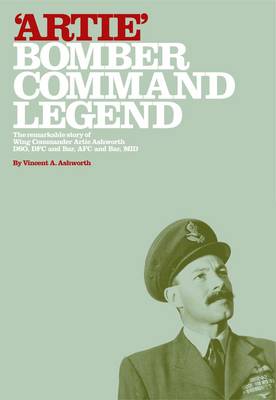 The story of RAF Bomber Command during the Second World War has been told many times, but rarely has it been painted as vividly as this accounting of Artie Ashworth's experiences. The strain of flying over the most heavily defended cities in the world, night after night for years, will be obvious to any reader. Artie Ashworth's story is one of extraordinary bravery and sacrifice set within the greatest air battle of all time. Artie Ashworth served two tours with No. 75 (New Zealand) Squadron, and in between he flew a tour with No. 38 and then No. 216 Squadron, first in Malta and then in the Middle East. Subsequently he was posted to the newly formed Path Finder Force HQ, playing a prominent role in designing the early Pathfinder tactics. He became one of the few Bomber Command war time pilots to have flown his damaged Wellington bomber back to England single-handed, having ordered his crew to bail out of their blazing aircraft. Seconded to the RNZAF in the Pacific, Artie flew Corsairs with 17F Squadron. Returning to the UK in late 1944 he was posted to No. 635 Squadron (Pathfinders). Somehow Artie survived 110 operations over enemy territory and in recognition was awarded four decorations for bravery, the DSO, DFC twice, and MID. After the war Artie served with Nos 139 and 59 Squadrons and B Squadron of the V-Bomber force, awarded the AFC for his work as a test pilot and a second AFC for distinguished service in command of No. 139 (Jamaica) Squadron. Vincent Ashworth pieces together the compelling story of one of the most distinguished pilots to fly operational bombers during the Second World War. Utilising his older brother's personal memoir and his remarkable and beautifully presented logbooks as a basis, Vincent Ashworth skilfully crafts Artie's complete story. A man described by his contemporaries as an exceptional pilot, redoubtable, and simply legendary. b/w illustrations

» Have you read this book? We'd like to know what you think about it - write a review about Artie - Bomber Command Legend book by and you'll earn 50c in Boomerang Bucks loyalty dollars (you must be a Boomerang Books Account Holder - it's free to sign up and there are great benefits!)

Vincent Ashworth's 'Artie - Bomber Command Legend' follows the successful publication of 'For Our Tomorrow He Gave His Today', the story of his fighter pilot brother who was killed in Normandy in 1944. He first developed his writing skills through regular contributions to one of New Zealand's farming magazines, and later, completing reports and lengthy studies, both as a World Bank Consultant and staff member. In 1960, he established and managed Ashworth and Associates, a successful Farm Consulting firm, the first of its kind in New Zealand. On retiring from the World Bank staff he took up Deer farming in New Zealand. Now fully retired, he focuses on writing.