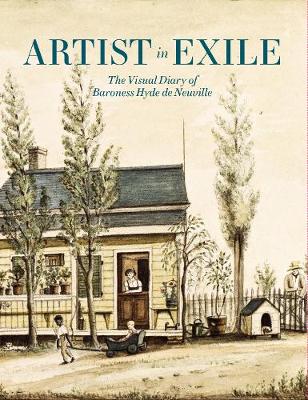 A major new illustrated volume on the visual diary of extraordinary artist and traveller Henriette, Baroness Hyde de Neuville, who lived and worked in America during the early nineteenth century. Artist in Exile is the first in-depth, illustrated exploration of the life and work of Anne Marguerite Josephine Henriette Rouille de Marigny, Baroness Hyde de Neuville (1771 1849), who arrived in America in 1807 as a refugee from Napoleonic France and embarked on an extraordinary journey of discovery. Her unparalleled, beguiling, watercolours and drawings - over 200, made while travelling through seven countries and on the high seas, published here together with previously unpublished documents and letters - provide an invaluable historical visual record of the early years of the American Republic and its racially diverse population. From this exciting material Henriette emerges as a cosmopolitan artist who exerted her influence in political and social circles on both sides of the Atlantic, courageously traversing the European continent, unescorted, to beg Napoleon to spare her husband's life. Neuville's status as a woman, and an outsider, made her a particularly keen and sympathetic observer of individuals from a range of socioeconomic and ethnic backgrounds. She drew the earliest ethnographically correct images of indigenous Americans, together with vistas predating the works of other traveler-artists, and long-vanished buildings. Although she arrived in America as an outcast, by the end of her second residency, as the celebrated wife of the French Minister Plenipotentiary, she was interacting with political leaders and making her mark on society in Washington, DC and New York City. Artist in Exile tells her compelling story. AUTHOR: Roberta J.M. Olson, who received her Ph.D. in Art History from Princeton University, is Professor Emerita of Art History at Wheaton College in Massachusetts, and Curator of Drawings at the New-York Historical Society, where she has worked since 2000. 276 colour illustrations

» Have you read this book? We'd like to know what you think about it - write a review about Artist in Exile: The Visual Diary of Baroness Hyde de Neuville book by Roberta J M Olson and you'll earn 50c in Boomerang Bucks loyalty dollars (you must be a Boomerang Books Account Holder - it's free to sign up and there are great benefits!)


A Preview for this title is currently not available.
More Books By Roberta J M Olson
View All