Volume I: Periods and Places

For an entire millennium, Byzantine hagiography, inspired by the veneration of many saints, exhibited literary dynamism and a capacity to vary its basic forms. The subgenres into which it branched out after its remarkable start in the fourth century underwent alternating phases of development and decline that were intertwined with changes in the political, social and literary spheres. The selection of saintly heroes, an interest in depicting social landscapes, and the modulation of linguistic and stylistic registers captured the voice of homo byzantinus down to the end of the empire in the fifteenth century. The seventeen chapters in this companion form the sequel to those in volume I which dealt with the periods and regions of Byzantine hagiography, and complete the first comprehensive survey ever produced in this field. The book is the work of an international group of experts in the field and is addressed to both a broader public and the scholarly community of Byzantinists, medievalists, historians of religion and theorists of narrative. It highlights the literary dimension and the research potential of a representative number of texts, not only those appreciated by the Byzantines themselves but those which modern readers rank high due to their literary quality or historical relevance. 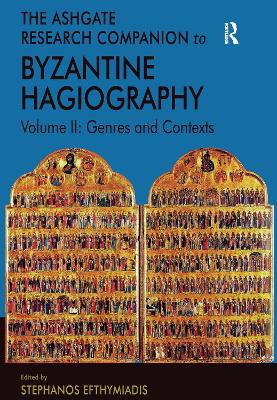 » Have you read this book? We'd like to know what you think about it - write a review about Ashgate Research Companion to Byzantine Hagiography book by Stephanos Efthymiadis and you'll earn 50c in Boomerang Bucks loyalty dollars (you must be a Boomerang Books Account Holder - it's free to sign up and there are great benefits!)

A Preview for this title is currently not available.
More Books By Stephanos Efthymiadis
View All

The Life of the Patriarch Tarasios by Ignatios Deacon (BHG1698): Introduction, Edition, Translation and Commentary
$226.80 $252.00