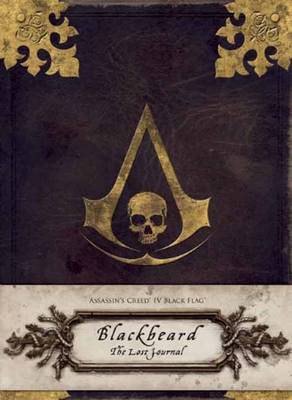 Delve into the world of Ubisoft's latest installment in the acclaimed Assassin's Creed (R) series with this fascinating glimpse of one of history's most storied legends: Edward Thatch, otherwise known as the infamous pirate captain Blackbeard.

Few moments in history have proven as timelessly fascinating as the lawless Golden Age of Piracy, which was largely played out in the Caribbean of the sixteenth and early seventeenth centuries. In this time of rebellion, fortune, intrigue, and adventure, Blackbeard stands as one of the most fearsome captains to have ever sailed the seas. Now, as the latest historical figure to take center stage in the Assassin's Creed (R) franchise, Blackbeard joins the ranks of Edward Kenway-father of Haytham Kenway and grandfather of Connor-as they navigate troubled island waters and carve out their destinies. Thoughtfully crafted to resemble an authentic pirate artifact, this illustrated journal delivers a unique insider's view into the world of the game through fascinating entries that provide a firsthand account of the day-to-day lives of the characters. This one-of-a-kind graphic novel - featuring beautifully etched illustrations and portraits, a wanted poster, removable Letter of Marque, torn pages ripped out by Blackbeard himself, and more - brings the bold worlds of Blackbeard and Kenway strikingly to life.

» Have you read this book? We'd like to know what you think about it - write a review about Assassin's Creed Iv Black Flag book by Christie Golden and you'll earn 50c in Boomerang Bucks loyalty dollars (you must be a Boomerang Books Account Holder - it's free to sign up and there are great benefits!)

Award-winning and seven-time New York Times best-selling author Christie Golden has written over 40 novels and several short stories in the fields of science fiction, fantasy, and horror. Among her many projects are novels for Star Trek, Star Wars--includi

A Preview for this title is currently not available.
More Books By Christie Golden
View All