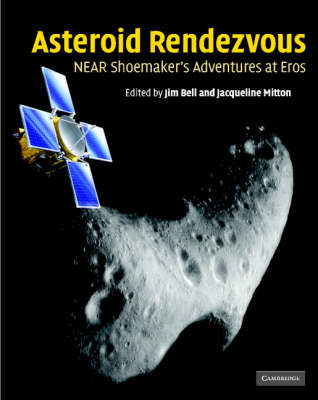 NEAR Shoemaker's Adventures at Eros

The Near Earth Asteroid Rendezvous (NEAR) was the first mission to orbit and eventually land on an asteroid. The mission was a phenomenal success, returning hundreds of thousands of images, spectra, and other measurements about the large near-Earth asteroid 433 Eros. This book is a collection of essays by some of the scientists and engineers who made NEAR such a success. The entire mission is described here in their own words, from the initial concept studies, through the development phase, launch, cruise operations, the flyby of asteroid Mathilde, the near-catastrophic main engine failure in 1998, the heroic rescue and recovery of the spacecraft, the amazing year-long up-close look at one of our most primitive celestial neighbors, and finally the daring attempt to land the spacecraft on Eros at the end of the mission. The book is liberally illustrated throughout with images from the mission and explanatory diagrams.

» Have you read this book? We'd like to know what you think about it - write a review about Asteroid Rendezvous book by Jim Bell and you'll earn 50c in Boomerang Bucks loyalty dollars (you must be a Boomerang Books Account Holder - it's free to sign up and there are great benefits!)

JIM BELL is an Assistant Professor in the Cornell University Astronomy department. He studied planetary science at Caltech and received his PhD from the University of Hawaii in 1992. His research focuses on the geology, chemistry, and mineralogy of planets, asteroids, and comets using data obtained from telescopes and spacecraft missions. He is a member of a number of space science teams, including the NASA Mars Pathfinder and NEAR. Author of some 70 first and co-authored journal publications, he is a frequent contributor to popular astronomy magazines and radio shows. The International Astronomical Union recently awarded him the honor of having asteroid 8146 Jimbell named after him. JACQUELINE MITTON trained as an astronomer (MA, Oxford, - physics; PhD, Cambridge - astrophysics). For about ten years she has been a full-time writer and media consultant specializing in astronomy. She has been the Press Officer (formerly called Public Relations Officer) of the Royal Astronomical Society since 1989, and was Editor of the Journal of the British Astronomical Association 1989-1993. She is the author or co-author of 16 published books.

A Preview for this title is currently not available.
More Books By Jim Bell
View All