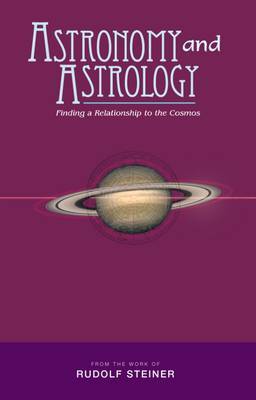 Finding a Relationship to the Cosmos

In the Middle Ages, Astronomia - one of the Seven Liberal Arts - was as much about astrology as astronomy. In fact the two disciplines only parted company in the seventeenth century, as the materialistic world-view gained greater prominence. Where once human destiny was connected to stars and planets, and spiritual or soul qualities were associated with the natural world, now the cosmos was seen as consisting of gases, fire and dead rock. Rudolf Steiner brings a new spiritual perspective to our study of the heavens. Humanity, he says, is intimately connected to cosmic beings, who in turn are related to planets and stars. There is meaning in the cosmos. Although Steiner rejects the simplistic notion of the planets determining our lives and behaviour, he makes a clear connection between the heavenly bodies and human beings. Whilst criticizing the superficial nature of much astrology, Steiner shows that as individuals, and with the guidance of spiritual beings, we choose an appropriate time of birth to match the destiny we are to live.
This enlightening anthology, expertly collated by Margaret Jonas, features excerpts of Steiner's work on the spiritual individualities of the planets, the determination of human characteristics by the constellation at birth, the cultural epochs and the passage of the equinox, cosmic influences on the individual and humanity, life in the planetary spheres between death and rebirth, solar and lunar eclipses, comets, and much more.

» Have you read this book? We'd like to know what you think about it - write a review about Astronomy and Astrology book by Rudolf Steiner and you'll earn 50c in Boomerang Bucks loyalty dollars (you must be a Boomerang Books Account Holder - it's free to sign up and there are great benefits!)

Rudolf Steiner (1861-1925) called his spiritual philosophy 'anthroposophy', meaning 'wisdom of the human being'. As a highly developed seer, he based his work on direct knowledge and perception of spiritual dimensions. He initiated a modern and universal 'science of spirit', accessible to anyone willing to exercise clear and unprejudiced thinking. From his spiritual investigations Steiner provided suggestions for the renewal of many activities, including education (both general and special), agriculture, medicine, economics, architecture, science, philosophy, religion and the arts. Today there are thousands of schools, clinics, farms and other organizations involved in practical work based on his principles. His many published works feature his research into the spiritual nature of the human being, the evolution of the world and humanity, and methods of personal development. Steiner wrote some 30 books and delivered over 6000 lectures across Europe. In 1924 he founded the General Anthroposophical Society, which today has branches throughout the world.

A Preview for this title is currently not available.
More Books By Rudolf Steiner
View All

Care for the Soul: Between Body and Spirit - Psychotherapy Founded on Anthroposophy
$30.59 $33.99