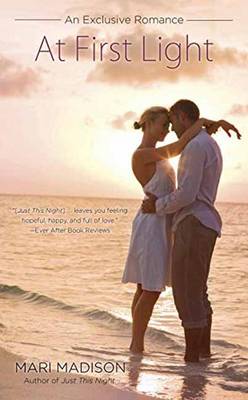 At News 9 San Diego, relationships don't get canceled. They just go on hiatus...

After five years of reporting in war-torn Syria, Troy Young has returned to his hometown of San Diego. Readjusting to civilian life is proving difficult. He keeps having panic attacks during live shots. But he's given one more chance as an entertainment reporter doing a "He Said, She Said" review segment. It's not what Troy had in mind-especially when he discovers who his new partner is.

Movie-obsessed Sarah Martin loves her gig at News 9...until the man who broke her heart enters the studio. Still, the desire between Sarah and Troy has not subsided even if he did pick his career over her. She doesn't want to trust him again but they'll need to overcome their off screen tension if they hope to handle the drama that's about to unfold...

» Have you read this book? We'd like to know what you think about it - write a review about At First Light book by Maria Madison and you'll earn 50c in Boomerang Bucks loyalty dollars (you must be a Boomerang Books Account Holder - it's free to sign up and there are great benefits!)

Mari Madison is the author of the Exclusive Romance series, including Break of Day and Just This Night. A former multiple Emmy Award-winning television producer, she has worked at television news stations in Boston, San Diego, and Orlando and helped launch the nationally syndicated morning show Better in New York City. Under the name Mari Mancusi, she writes young adult books, including the Blood Coven Vampire novels, most recently Soul Bound and Bad Blood. She lives in Austin, Texas, with her husband and young daughter and their dog, Mesquite.