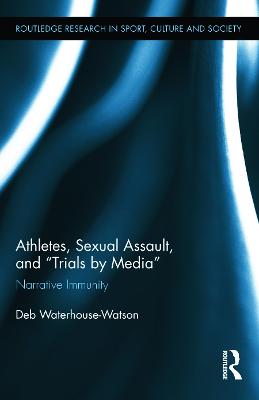 Since footballer sexual assault became top news in 2004, six years after the first case was reported, much has been written in the news media about individual cases, footballers and women who have sex with them. Deb Waterhouse-Watson reveals how media representations of recent sexual assault cases involving Australian footballers amount to "trials by media", trials that result in acquittal. The stories told about footballers and women in the news media evoke stereotypes such as the "gold digger", "woman scorned" and the "predatory woman", which cast doubt on the alleged victims' claims and suggest that they are lying. Waterhouse-Watson calls this a "narrative immunity" for footballers against allegations of sexual assault.

This book details how popular conceptions of masculinity and femininity inform the way footballers' bodies, team bonding, women, sex and alcohol are portrayed in the media, and connects stories relating to the cases with sports reporting generally. Uncovering similar patterns of narrative, grammar and discourse across these distinct yet related fields, Waterhouse-Watson shows how these discourses are naturalised, with reports on the cases intertwining with broader discourses of football reporting to provide immunity. Despite the prevalence of stories that discredit the alleged victims, Waterhouse-Watson also examines attempts to counter these pervasive rape myths, articulating successful strategies and elucidating the limitations built into journalistic practices, and language itself.

Other Editions - Athletes, Sexual Assault, and "Trials by Media" by Deb Waterhouse-Watson » Have you read this book? We'd like to know what you think about it - write a review about Athletes, Sexual Assault, and "Trials by Media" book by Deb Waterhouse-Watson and you'll earn 50c in Boomerang Bucks loyalty dollars (you must be a Boomerang Books Account Holder - it's free to sign up and there are great benefits!)

Deb Waterhouse-Watson is an Associate Lecturer in the School of English, Communications and Performance Studies at Monash University, Australia. She is the author of Playing Defence in Sexual Assault "Trial by Media": The Male Footballer's Imaginary Body, and Framing the Victim: Sexual Assault and Australian Footballers on Television.