The Atlas of Early Modern Britain presents a unique visual survey of British history from the end of the Wars of the Roses through to the accession of George I in 1715.

Featuring 117 maps, accompanied throughout by straightforward commentary and analysis, the atlas begins with a geographical section embracing England, Scotland, Ireland and Wales and providing clear orientation for the reader. It then focuses separately on the sixteenth and seventeenth centuries, dividing its coverage of each into four key themes:

Geography and Counties - Outlining in detail how Britain's geography was shaped during the period;

Politics and War - the main campaigns, rebellions and political changes in each century;

Economy and Culture -charting Britain's wealthiest towns, the locations of Britain's houses of aristocracy and the effects of The Great Fire of London;

The broad scope of the atlas combines essential longer-term political, social, cultural and economic developments as well as key events such as the Spanish Armada, the Dissolution of the Monasteries, the Civil War and the Glorious Revolution. Its blend of clear visual aids and concise analysis represents an indispensable background and reference resource for all students of the early modern period.

Other Editions - Atlas of Early Modern Britain, 1485-1715 by Christopher Daniell 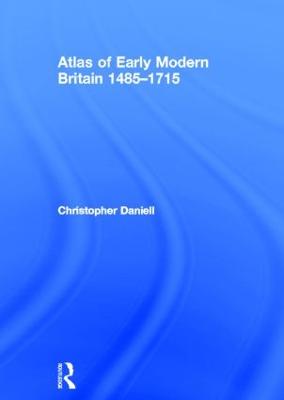 » Have you read this book? We'd like to know what you think about it - write a review about Atlas of Early Modern Britain, 1485-1715 book by Christopher Daniell and you'll earn 50c in Boomerang Bucks loyalty dollars (you must be a Boomerang Books Account Holder - it's free to sign up and there are great benefits!)

Christopher Daniell is a Research Associate and a former Honorary Visiting Fellow at the Centre for Medieval Studies, University of York. He is author of the companion volume Atlas of Medieval Britain (Routledge 2007). He currently works as a Senior Historic Building Advisor for the British Government.

A Preview for this title is currently not available.
More Books By Christopher Daniell
View All